Dog Obsessed with Ball, What to Do?

There's no better way to play with your pup than a good old-fashioned game of fetch. It's a fun way to strengthen your bond with your dog while also giving them an outlet to release some of that pent-up energy. Plus, it can keep them in shape.

Most dogs will not hesitate to play fetch with you. Even a slight mention of the ball can send many dogs into a tizzy! For the most part, this excitement is nothing more than some good-natured fun.

But what happens when that excitement turns into an obsession?

Believe it or not, dogs are fully capable of developing some OCD-like tendencies when it comes to their ball. Your canine companion can become obsessed with the ball to the point that it starts affecting their daily lives.

So, what are you supposed to do?

The Problem with Ball Obsessions

I know what you're thinking, "So what if my dog is obsessed with their ball? Why does it matter?"

Well, this kind of behavior can lead to a lot of issues. Like humans, dogs with unhealthy obsessions interfere with their normal lives. To make matters worse, these problems can get worse with time.

Here are some reasons why a ball obsession should be addressed.

One of the biggest risks your dog faces is over-exertion and exhaustion. Dogs that are obsessed with playing fetch will run themselves past their breaking point. Usually, canines are quite in tune with their bodies. They know when to slow down, when to take a break, and when to stop.

But when an obsession starts clouding your pup's better judgment, things can go bad very quickly. Unsupervised dogs can play so hard that they get injured or become so tired that they pass out.

We've all seen what lengths dogs will go to protect the things they love. When that thing they're trying to protect is a ball, there is a serious risk of injury.

Again, obsessions can cloud your dog's judgment so much that they may start lashing out at anyone that even tries to touch the ball. This could be another dog, a child, or even you!

An unhealthy fixation on the ball can lead to some trouble in even benign situations. Say, for example, that the ball is accidentally thrown into the street. Do you think an obsessed dog would stop for traffic? Chances are, they won't.

They develop a sort of tunnel vision for the ball. It's all they care about. When it gets away from them, they will chase it until it's in their possession. Unfortunately, this distraction can cause serious accidents.

Stress and anxiety are two very real issues that could affect your pup. Most dogs develop anxiety whenever they are left alone for too long or they are exposed to new things they've never seen.

For a pooch that's obsessed with their ball, that anxiety a develop anytime they don't have the ball. This could lead to wining, destructive behavior, and even health problems.

Why Does Obsessive-Compulsive Behavior Develop in Dogs?

Chasing a ball does a lot for dogs. It doesn't matter whether you have a large German Shepherd or a tiny Pomeranian, all canines have that urge to chase. It's an instinctive response that stems from their early ancestors.

In the past, dogs were hunters that had to chase down prey to survive. While modern dogs are heavily pampered, that prey drive still exists. It's why dogs love to chase squirrels and play fetch.

That innate urge to chase prey is hard to stop. It feels good for dogs. Their body releases endorphins, giving them a feeling like they're on cloud nine!

It's not hard to see why obsessions develop. They love the feeling of chasing a ball, so they want to replicate those feelings as much as possible.

Signs That Your Dog is Developing an Unhealthy Ball Obsession 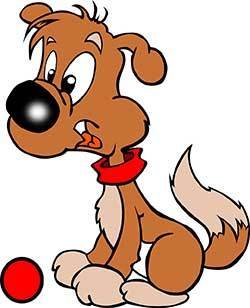 Getting excited about playtime is perfectly normal. However, there's a fine line between excitement and obsession. You may start to notice the following signs early on and choose to ignore them.

This only makes it harder to work past the issue in the future. It's important to keep an eye on your pup and look out for any questionable symptoms. The sooner you make changes, the better.

The most obvious symptom is anxious behavior. Does your dog start to whine or drool whenever they are away from the ball? How about when it's in your hand and you're waiting to throw it?

This could be a sign that your dog is becoming obsessed with the ball. Pups who can't stand to spend a single moment away from the ball will exhibit all kinds of anxious behavior.

They may drool or bark as a sign of protest. In severe cases, they may even start to tear things up out of frustration.

Take a look at your dog's demeanor next time they are playing with the ball. Are they paying attention to you and the ball or are they simply fixated on the toy? The latter scenario is a big red flag.

Many dogs will get into a strange state. It's almost like they're in a trance. They might refuse to look at anything else but the ball. Oftentimes, their bodies will tense up as well.

Dogs should be aware of their surroundings at all times. If they are ignoring everything else but the ball, that might be a cause for concern.

This is related to unhealthy fixation from the previous point. However, it goes a step further because you're unable to capture your dog's attention.

If they are refusing commands, treats, and praise, you need to do something about this obsession as soon as possible. Dogs normally love food and praise! When they don't want all of those fun perks, there's something amiss.

Finally, pay attention to how they protect the ball. Aside from barking, growling, and nipping, look out for the less obvious signs. This could include hiding the ball in their kennel, taking it with them wherever they go, and more.

What You Can Do

Dealing with a ball obsession can be tough, but you must take action to stave off bad behavior and reduce the chances of something serious happening.

Helping your dog overcome an obsession is about directing their energy to something a bit healthier. It involves some strict guidelines and vigilant training. However, the results will be well worth it.

This sounds harsh, but it's necessary. Limiting your dog's access to the ball can do a lot to help them move on.

You don't have to toss the ball out entirely. In fact, we don't recommend this at all. It could lead to some aggression and anxiety. Instead, put the ball away so that they can't see it or get to it.

Your pup may have a hard time at first this. They may whine, cry, and bark. But be vigilant! Eventually, it will be an "out of sight out of mind" situation.

Once you have started limited access to the ball, create a designated playtime. You can give your dog that fun playtime with the ball that they love. However, you need to keep things structured. This gives your dog something to look forward to.

Beyond that, it shows your pup that they don't need to obsess over the ball. They know that they will see and play with it again tomorrow. This can help put their anxiety at ease.

Just make sure that you stay firm to that schedule you create. Missing a day could have the opposite effect of what you're after. The same goes for playing outside of the designated time.

Giving your pup some new options to play with can do a lot to stave off the obsession. Take a look at the ball that they are fixated on. Now, choose something completely different.

Find a toy that offers a different texture, color, and shape. Over time, you can start swapping out that ball they love with the new toys. The goal is to diversify their toys so that you can continue cycling through them. This will prevent your dog from getting too fixated on one.

This is an important tip that you should adopt. When you're playing fetch with your dog, provide some firm commands that teach them how to behave.

You need to let your dog know that you are in control. Something as simple as, "That's Enough" should suffice. This command lets them know that playtime is over and it's time to go back inside.

It may take some time for your dog to grasp these new commands. However, they're a great way to keep your dog safe and focused on you. Keep eye contact and provide plenty of positive reinforcement when they drop the ball and listen.

Direct Their Energy to Exercise

Want an easy way to calm your dog down? Go for a run!

Exercise is a great way to put a stop to all of that obsessive behavior. It tires out your dog, forcing them to relax a bit and not go crazy about their favorite ball.

Obsessive behavior over a ball is more common than you think. The problem is that most owners don't know how to identify those signs and provide their pups with the help they need.

On the obsessive-compulsive spectrum, excitement over a ball is a relatively minor issue. Though, you still need to put a stop to it. Teaching your dog to look past the ball and focus on the world around them ensures that they can stay safe while still having fun.