If you're looking for something that can keep your dog entertained for hours on end, a squeaky toy is the way to go. While these toys can definitely get annoying after a while, there's no doubt that dogs love them.

Take one look through your local pet store and you're bound to find aisles of toys with a built-in squeaker.

It's something that drives many owners crazy. Some even get so annoyed with the constant barrage of squeaks that they eventually just remove the device inside.

Oftentimes, something surprising happens. Dogs lose interest in the toy when there's no squeaking involved! So, what exactly is it about squeaking toys that drive dogs crazy?

For many dogs, the love of squeaky toys is purely instinctive. Despite centuries of domestication, modern dogs are still ancestors of wild canines. No amount of breeding and luxury living will take away those natural instincts to hunt. This is known as prey drive.

All dogs have prey drive, even tiny pampered breeds. With that said, some dogs do have a higher drive than others. You'll often find that herding and hunting dogs are the ones who get the most excited about squeaking toys.

That high-pitched noise that the toy emits is very reminiscent of an animal in distress. In the wild, dogs had to hunt to get food. They'd attack small creatures and exhibit some aggressive behavior to kill them off. Oftentimes, those creatures would screech out in pain.

Have you ever wondered why your dog thrashes the toy around in their mouth as it squeaks? It's because they're trying to "kill" it.

What about when they lose interest once the squeaker is broken or removed? Well, in their minds, the creature is dead and the job is done! It's a bit of a morbid fact, but it's how your precious pup thinks.

The Joy of Instant Gratification 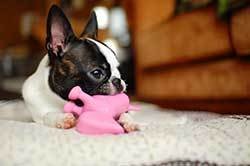 Sometimes, the love for squeaking toys is just a matter of instant gratification. Dogs rely on their sense of hearing for a lot. Having that immediate response to biting down on a toy is enjoyable to them. It tells them to keep chewing!

You may find that it's not just squeakers that do the trick. Some dogs have a strong response to toys with crinkly foil or plastic bottles in them.

If that's the case for your pup, they simply like the instant response they get.

If you have a strong response to the squeaking sound yourself, your dog may have learned to make a connection. Your dog loves it when you pay attention to them. Even if you respond negatively, that little bit of attention that you throw in their direction means the world to them.

While dog owners go out of their way to train their pups, squeakers are a way for dogs to turn the tables.

They've learned that you respond to that noise, so they'll keep making it so that you continue to do what they want and shower them with attention.

To Squeak or Not to Squeak?

Now that you understand why dogs have such a connection with squeaking toys, should you let your dog play with them? Absolutely!

Squeaking toys are a great way for your dog to let go of pent up energy and get some exercise. There's no harm in letting your dog tap into their instincts or get instant gratification. As long as the squeaking noise isn't causing a bother to others, let them have fun.

You can always take it away when the noise is inappropriate. The toy will then become a reward and can be used to stave off bad behavior.

If you're in the market for a new squeaker toy, you have plenty of options to choose from. Dogs can get pretty aggressive with these toys, so it's important to choose one that can withstand some wear and tear. Here's a great option from Kong.

Like the rest of Kong's toy line, the Air Squeaker is built with toughness in mind. It's made out of the same material as tennis balls. So, you don't have to worry about chipped teeth or pain.

The material has a bit of give to it, allowing your dog to chew comfortably. It's in the shape of a stick and features a built-in squeaker inside.

The unique shape of the toy is great for a game of fetch and having fun with your pup.

Also Read: Sounds that will Make your Dog Howl