7 Possible Reasons Why Your Dog Stares at the Wall

Ever walk into a room to find your dog aimlessly staring at a wall? Of all the interesting things in your home, they choose the wall to stare at! Believe it or not, this is a pretty common thing with canines.

Dogs do all kinds of weird stuff that we can't explain. This behavior happens to be one of them!
Most of us just chalk it up to dogs being dogs and call them over to break their gaze.

But have you ever wondered why they stare at the wall?

It turns out, there are several reasons why your dog is doing this! Some are innocent enough. However, others can indicate potentially dangerous health issues.

There's no way for dogs to tell us what they find so fascinating with the wall. So, we have to use our knowledge of canine behavior to solve this conundrum ourselves!

Here are 7 Possible Reasons Why Your Dog Stares at the Wall.

#1. They Spotted a Captivating Pest

Sometimes, dogs stare at the wall because they see something you can't. No, we're not talking about ghosts! We're talking about bugs or pests!

Dogs have an impressive sense of smell and hearing. They're fully capable of spotting a tiny bug crawling on your wall.

It might blend into the paint color or be too far away for you to see. But for your pooch, it's an exciting invader they want to keep an eye on!

Check the wall and see if you can spot it! If the bug flies or runs away, your dog's eyes will likely follow. This behavior isn't a cause for concern. Though, you might want to contact pest control to ensure that your home doesn't have any bugs that are dangerous to your dog.

Contrary to popular belief, seizures aren't always the dramatic convulsions you see on television. Some seizures can be subtle, making them difficult to identify.

Partial or focal seizures, for example, don't involve shaking at all. Instead, these seizures cause dogs to stare at the wall or ceiling. Sometimes, staring is the only symptom. But in some cases, the staring might be accompanied by biting at the air.

Next time you catch your dog staring, try to pull focus. If your dog ignores you and keeps starting no matter how hard you try, you could be looking at a focal seizure.

Contact your vet straight away! Seizures are usually a symptom of some other serious health condition, such as cancer or epilepsy.

The only way to know for sure is a trip to the vet's office. Luckily, there are many medications to keep these bouts under control.

#3. They Hear Something on the Other Side

Once again, your pup's finely tuned senses are to blame! Oftentimes, dogs can hear what's going on outside even though you can't.

Your dog knows that they can't go outside to investigate. So, they'll stare at the wall as they concentrate on listening.

If there's a window nearby, they may be so inclined to go look themselves. But if there's not, you might see your dog's head cock to the side every few minutes.

Sometimes, the noise may not be on the other side of the wall. Instead, it could be coming from inside the wall. Press your ear to the wall and see if you can hear any critters running around.

If that doesn't result in any findings, the offending noise could be outside or hundreds of feet away.

Related: Why Do Dogs Hate the Mailman at the Door

#4. Your Pooch is Suffering from CDS

CDS, or canine Cognitive Dysfunctional Syndrome, is a condition that affects older dogs. It's akin to Alzheimer's Disease or Dementia in humans. The condition affects your pup's mental prowess.

There are many symptoms of this condition. Most dogs will only experience a couple of them in the early stages. Unfortunately, this often leads to misdiagnosis.

Dogs with CDS can become disoriented with their surroundings. They might get stuck in corners, walk around aimlessly, or even stare at the wall.

As the disease progresses, dogs can experience changes to their sleep habits, interactions with humans, and more.

Many will also have accidents, as they forget their housetraining.

There's no way to cure Canine Dysfunctional Syndrome. But, you can mitigate its effects on your dog. To do that, you need to catch it early! Take your dog to a vet if you suspect that CDS, or any other brain conditions, is to blame for your dog's odd behavior.

#5. It's a Compulsive Behavior

Generally, these behaviors are of no concern. They're not harmful, and unless they are causing problems around the home, there's no need to intervene.

But, you may want to think about addressing the underlying cause of the compulsive staring. Consider playing with your dog more or giving them some ways to stay occupied throughout the day.

If stress is to blame, address the trigger so that your dog can live more comfortably. You can consult with your vet for tips or go to a behavioral trainer.

Related: What to Do When your Dog is Obsessed with Balls

#6. They're Bored and Want Attention 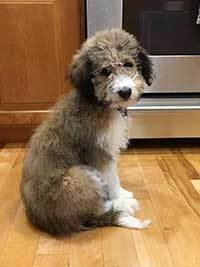 Do you always call your dog's name to try and get them out of their "haze" when they stare at the wall? If you do, your dog could be playing you like a fiddle!

Dogs are smart creatures. If you try to pull their focus when they stare, they've learned that staring at the wall is a surefire way to get your attention. So, they'll use the behavior to their advantage anytime they get bored.

Is your dog head-pressing when they stare? This behavior is quite unique. Instead of staring at the wall from a distance, they get right up on it and place their head against the wall. You've probably seen pictures of this behavior before.

While it makes your dog look cute and guilt-ridden, this behavior could be very serious!

Head-pressing is a response to a nervous-system issue. In fact, it might mean that the issue has progressed to the point of causing neurological issues.

Head-pressing is a coping mechanism when things go out of whack in your dog's brain. Oftentimes, it means that they are under the influence of toxins. For example, liver disease causes the organ to produce high levels of ammonia.

That ammonia can intoxicate the brain, making it difficult for your dog to function. So, they use head-pressing to get a bit of solace.

There are several reasons why your dog could be doing this. A wide range of health problems result in nervous-system damage, so you need to pay a trip to the vet for a diagnosis.

Occasional staring contests with the wall are no major cause for concern. If the behavior doesn't occur regularly, there's a good chance that the reason behind it is innocent.

It's only when staring becomes a chronic behavior that you should be concerned. If you're worried about your dog's staring, consult with your vet. It doesn't hurt to rule out medical issues. Take the behavior as a sign and do what you can to address any potential problems that could be causing the behavior.