A Dogs Tail Can Tell You a Lot: Here are 13 Positions and Their Meaning

Through thousands of years of domestication, humans have learned a lot about canines. Sure, we can't read their minds or decipher their barks just yet. But, we have other ways to figure out what they're feeling.

Beyond basic body language, one of the easiest ways to get a good understanding of what's going on inside your dog's mind is by paying attention to their tail.

Dogs use their tails for many different things. If you've ever seen a sports dog zip their way through a course, you might have seen them using their tail for balance and agility. Meanwhile, other dogs may use it to spread their scent and make their presence known.

Canines also use their tails to communicate with each other. Even if your dog has never been part of a pack, those instincts still exist.

Ever wonder what your dog is trying to say? Here are some common tail positions and what they could mean.

13 Dog Tail Positions and Their Meaning

If your dog's tail is raised up but not quite standing mast, it shows that they're feeling dominant and confident in their surroundings. You may see this position when you bring your dog to the dog park.

Many will use this position to tell other dogs that they are not to be messed with! It's not necessarily an aggressive tail position. It's simply a way for your dog to establish his or her dominance in the group.

#2. High and Curled Over the Back

Now, when the tail curls slightly over the back, your dog is feeling super confident in their position! This isn't always the case. Some dogs have naturally curly sickle tails.

They can't help but let their tail tilt towards their back.

But if your dog normally has a straight tail, the curl is something to be proud of. Your pooch is feeling in control and wants to show that off!

Fast tail wagging is always a good sign. It means that your dog is excited about something they're experiencing!

You can easily distinguish this tail position from others because it looks like your dog's tail is moving a mile a minute!

Chances are, that wagging is accompanied by other joyful body movements. Your pup might start tapping his or her toes. Or, they could lose their control and start shaking their entire bottom half!

Dogs in this state of mind are a joy to be around. But sometimes, it can be too much. Your dog is over-excited. It may be worth trying to calm your pup down a bit before they do something they'll regret.

A more relaxed tail wag is a bit different. The tail position will be higher, but the wagging won't be as frantic. Instead, it'll be at a nice steady pace.

This is most common when owners finally return home from work. Dogs might move their tail in this position when dinner time comes around or they see a treat.

It means that your dog is happy and relaxed. They're not overexcited like the previous tail position. Your pup is having a grand old time, but they're still thinking clearly.

If your dog's tail is still and in a horizontal or near horizontal position, it just means that they're paying attention to what's going on around them. When you see this, you're looking at a dog who doesn't want to miss a moment of the action that's in front of them.

This position can go either way.

Your dog could be paying attention to something because they feel like things could go sour at any moment.

Alternatively, your pooch could be focusing very hard on a toy or person that they've never seen before.

Whatever the case may be, this position is pretty neutral. As long as it doesn't escalate to a negative tail position, you should be fine. 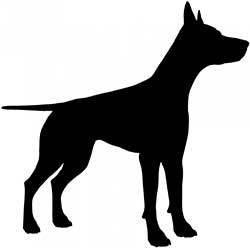 This position looks similar to the previous one. Your dog's tail is nearly horizontal. However, the difference is that the tail is stiff and still.

Instead of the relaxed nature of the previous tail position, it's completely motionless.

When this position happens, your dog is taking a very cautious approach. You'll see this tail position whenever your dog is meeting a new canine or human stranger for the first time.

Think of it as a challenge. Your dog is waiting to see what the stranger is going to do. If things go south, your dog will instantly transition to a more aggressive state. But if things stay peaceful, your dog may move onto tail wagging!

A lowered tail that's stretched away from the hind legs is the position you want to see most of the time. It just means that your dog is relaxed and comfortable.

Ideally, this should be the position your dog has while they're moving around the home. There's no major drama going on.

Your pup is at ease and cozy. They may even be a bit tired, so don't be surprised if you see them dozing off shortly thereafter.

Here's a position that you should respond do. When the tail is down and close to the hind legs, it means that your dog is uncomfortable. It's not quick touching the hind legs. Nor is it tucked under.

Your dog doesn't know what's going on. They might be in a new environment or around new people. When you see this tail position, your dog is experiencing some mental unease.

They're feeling insecure and little down. At this point, it won't take much to send your dog over the edge. So, tread carefully. Comfort your dog and don't expose them to any uncomfortable stimulants.

Force exposure is only going to exacerbate their fears and make your pup go from zero to a hundred in seconds. Keep things calm and make your dog feel relaxed.

#9. Positioned Low Against the Hind Legs

This position looks almost like your dog is tucking their tail between their legs. But if you look closely, it's not quite there yet.

The downward position simply means that they're feeling submissive. They accept their role in the social hierarchy and know that they aren't the top dog.

You can sometimes see this behavior in a dog park. Some dogs will do it around humans, too.

Many canine behavioralists believe that this tail position is an attempt to make their body smaller. They don't want to look big and tough. So, they'll keep the tail low to ensure that fellow canines know that they're not looking for trouble.

#10. Tucked Between Their Legs

A full tuck between the legs should be a cause for concern. This isn't something that any dog wants to see because it means that your dog is scared. 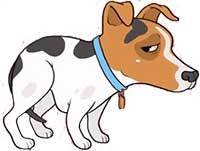 Think of it like your dog waving the white flag. They want others to know that they are frightened and don't want to be hurt.

You can see this behavior anywhere. It's not just reserved for dogs or humans that your pup is scared of.

Dogs will do it when they hear loud frightful sounds, when they're in crowded places, or when they're around anything scary.

Give your dog all the comfort and love they need when you see this. Be gently and don't force anything on your dog. Dogs are very vulnerable when they are in this state of mind, so the last thing you want to do is create any more fears.

Ever see your dog wag his or her tail slowly while it's raised up a bit? Oftentimes, this means that your dog is simply confused! The tail position may be paired with a tilted stare and perky ears.

They simply have no idea what's going on! The good news is that they're neither scared nor angry. Once your pup understands things a bit better, but for now, it's completely innocent.

A stiff tale is never a good sign. This is especially true if your dog's other behaviors look nervous.

Generally, this tail position means that your dog is feeling tense. Maybe they encountered an aggressive dog and or a human they don't like. You must take action to make your dog feel comfortable.

This position can be a precursor to aggression. Show your dog that everything is fine and help them move on.

A raised and alert tail is often the last warning sign that dogs will give before they go on the attack. Usually, the alarming tail position is accompanied by a lowered head and prominent hackles.

Hackles are the erect hairs on the back and tail.

If push comes to shove, your dog could start growling or barking. Safely remove your dog from the situation to avoid a disaster!

What About Illness or Injury?

In some cases, your dog's position could be indicating a serious health issue. The tail might stay down for a long time. They may also exhibit other serious symptoms, such as lethargy, vomiting, or mobility issues.

Use this as a sign and bring your dog to the vet immediately.

Your dog could be suffering in silence from a disease. The tail could be injured, too.

The tail can get broken or hurt just like any appendage. A fracture, nerve damage, or even spinal issues will prevent your dog from using their tail like they normally would.

If they haven't moved their tail in a while, seek veterinary advice to diagnose the problem and seek treatment.

Dogs can't communicate through speech to tell you how they feel. So, they rely on their trusty old tail to show you what's going on in their head.

Learning to read their tail position can help you address their needs a bit better and get them out of uncomfortable situations.

Also Read: Common Reasons Why Your Dog May Pee on Your Bed