Why Do Dogs Hate Being Blown on the Face?

Ever blow in your dog's face? Chances are, you witnessed a strong reaction! Almost all dogs are going to have an over-the-top response. They might have a minor fit complete with grumbling and barking. Some may even start to lick the air or nip in your direction.

Dogs with very little patience can go so far as attempting to bite you.

Make no mistake: Blowing air in dog's faces is not something you should do! Despite the adorable reactions, the sensation makes your dog irritated and unhappy! It's a well-documented fact that dogs do not enjoy sudden air kisses in their direction.

Those unexpected reactions might seem cute at first. But continuing to do it could push your dog over the line, resulting in some behavior that's not befitting of "human's best friend."

Why Does Blowing in a Dog's Face Bother Them?

So, what exactly is it about blowing air in your dog's face that they hate so much?

As it turns out, canines have several reasons to hate it! Here are some of the most common.

It's Unexpected and Surprising

When you suddenly blow a burst of air in your dog's direction, it's an unexpected sensation they didn't ask for. Think about the last time someone did that to you! Unless you're super close with that person, you probably swatted them away or did your best to get out of the way.

Dogs do the same thing. They might not mind feeling your breath naturally. But the moment you forcefully blow on their face, things aren't so fun anymore!

Fido's gut reaction is to snap back or flinch! It's the same reason why dogs flinch anytime you sneak up on them or they hear a loud sound. Dogs simply don't like surprises.

Surprises like that are far worse for dogs than it is for humans. It's not just the element of surprise that throws them off. The sensation itself is also a problem.

Their faces are more sensitive than ours. Their eyes, nose, and ears are more attuned to environmental changes, leading to a strong reaction to sudden blasts of air.

The nose, in particular, is ultra-sensitive to air. Even blowing on the face could make it dry up quickly.

When you start to think about it that way, your dog's response starts to seem more warranted, doesn't it?

Here's a bit issue that most dog owners don't think about.

Sudden puffs of air are often seen as a sign of dominance or aggression. Your playful air kisses might come off as a domineering act, causing your dog to act out.

You see, canines use similar responses to look tough. Pay attention to how your dog acts the next time they see another dog. If both dogs are pretty dominant and strong-willed, don't be surprised to see them go face-to-face. 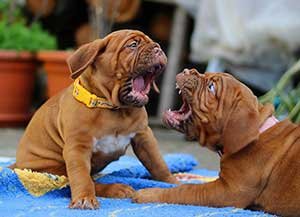 Once they get close, they'll start puffing up their cheeks and blowing puffs of air. It almost sounds like a minor cough!

Dogs will do this to intimidate one another until one side of the equation backs off a bit.

By blowing in your pup's face, you're basically doing the same thing!

Your pooch is already loyal to you, so that sudden act of perceived aggression is confusing.

They may think that something is about to pop off, so they get a bit antsy in preparation!

You're Too Close for Comfort

Close face-to-face contact is a big no-no for canines. All dogs are different in this regard. Some don't mind it all if it comes from owners. That's why you can see pet parents giving their dogs close hugs and kisses on the face!

However, some will react negatively regardless of who it is! Even those who are OK with close face contact with loved ones will not appreciate up-close interactions they're not familiar with.

Canines need their personal space. Getting up in their face is unpleasant and an act of potential aggression.

In fact, this is usually the reason why young kids get attacked. Kids have a knack for invading personal space. They don't know any better, so they see a cuddle dog and automatically want to grab its face.

Even the most well-trained dog is not going to like that. So, they go into defense mode and attack!

Dogs can learn to tolerate the behavior from family members, but throwing a burst of blown air into the mix will throw that comfort level out the window. It's best to give your pup their personal space and not push them too far.

Your Breath is Unpleasant

Hate to break it to you, but your dog might think your breath stink! 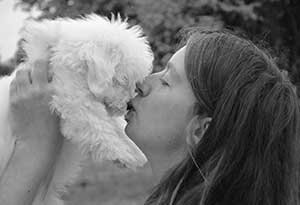 Don't take it personally or get self-conscious. Canines have powerful olfactory glands with capabilities that surpass our own.

It's estimated that dogs have around 300 million olfactory receptors in the nose.

That's something like 10,000 times more than what humans have.

That strong sense of smell is why dogs are able to sniff out hidden food or pick up scent trails from a distance.

To you and those around you, your breath might be quite pleasant. But dogs can smell things that you can't. Not only that, but they don't always react well to the aromas we enjoy.

For example, minty breath could irritate your pup's sensitive nose, causing a strong reaction. The same goes for spicy odors.

What About Other Air-Focused Activities?

I know what you're thinking: You've seen your dog stick its head out the window or relax by a high-powered fan.

If they hate forceful air so much, why do they still enjoy those activities? 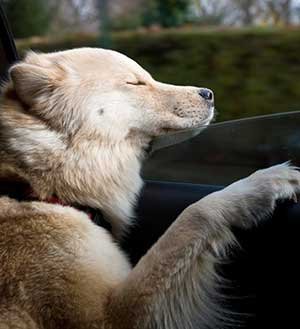 Well, those sensations are a bit different. Yes, the sudden burst of air is a lot to handle. But, many dogs put up with it because of the other perks.

When your dog sticks its head out the car window, it's like they're experiencing aromatic bliss!

Smells are coming in from all directions, which only excited your dog. The same principles apply to gusts of wind outside or the effects of a strong fan that's blasting smells from your kitchen directly to their nose!

There's also one key difference with those activities. Your dog has complete control.

If they've had enough, they can easily pop their head back inside or move away from the fan. They hold the reigns and can dictate when they feel those intense bursts of air.

That's not the case with you blowing on their face. It comes unexpectedly and is something they can't escape!

Blowing air in dog's faces seems fun and cute. But for your canine companion, it's a nightmare!

While you may be tempted to try and find ways to put an end to that discomfort, your efforts will be futile. There's nothing you can do to make your dog love it. They're entitled to feeling confused or uncomfortable.

Dogs have no way to know that blowing air in their face is innocent. They might perceive it as a threat or punishment. The last thing you want to do is provoke your dog.

Put an end to blowing on their face and make sure that none of your friends or family do it. Leave that silly activity in the past so that you and your dog can live comfortably.

Also Read: Interpreting Tail Positions in Dogs  What Do They Mean?