When you have a dog, it's just you and them against the world! Dogs are perfectly fine when it's just the two of you. You're more than enough to keep them happy.

But let's be real: Are you available to be with them 24 hours a day? Chances are, the answer to that is "No."

For this reason, many people get a second dog. On paper, adding another dog into the mix seems like a good idea. It's a canine companion for your canine companion! And if you're a serious dog-lover,

it's another member of the family to love!

All that said, deciding whether or not to get a second dog isn't a cut-and-dry decision. There are many factors to consider. Not all dogs are going to benefit from having a new canine family member. All canines are different. They all have their unique personalities and quirks.

Before you adopt another dog, you need to consider the advantages and disadvantages it will bring to you and your first dog.

The Pros of Getting a Second Dog

First, let's go over the benefits. Getting a second dog seems like a no-brainer to many people. Dogs are such lovable creatures that it's a joy to have more than one in the home.

But what kinds of advantages will your first dog experience?

The most obvious is the constant companionship. Socialization is important for dogs. Unfortunately, not all dogs get the level of socialization they need.

These days, many dogs are holed up in a home all by themselves all day. Things used to be very different in the past. Our early ancestors spent every waking moment with dogs. Canines accompanied humans everywhere.

Even a century or two ago dogs had a lot more freedom than they do now. Many people let their dogs roam free outside, which let them meet new people and dogs.

Today, many canine companions lack the right socialization skills because their only exposure to people and dogs is during walks. With another dog in the home, that's not an issue! They have another companion living with them!

Suddenly, the days become more interesting. Your two dogs will work off of each other's energy. You'll notice the two playings together, supporting each other, and comforting one another.

After a long day of work, finding time to play with your dog isn't always easy. Your pup spent all day lounging around waiting for you to come home and play! So, you have to give in and have some fun.

A second dog can do a lot to lift that burden off you. Dogs love to play rough. They will tackle each other, run around, and get plenty of exercise.

A second dog might be the thing you need to get your dog off the couch!

Believe it or not, dogs can do a lot to comfort each other. Ever notice a dog licking another's ear or getting super close? Oftentimes, those little gestures are the dog's way of showing that they are there to help them feel comfortable.

There's no better way to see the positive effects of canine companionship than with a dog that suffers from separation anxiety.

Many dogs hate being left alone! They don't have the skills to stay occupied on their own, so they turn to destructive behaviors. It's one of the biggest reasons why some dogs get abandoned at shelters.

If you can't stay home all day, having a second dog can do a lot to stave off separation anxiety. The mere presence of a second dog will make a huge impact. But, your two dogs will find a way to stay entertained and comfortable even if they're locked in kennels.

Finally, adding a second dog creates a much larger pack for your dog to enjoy! Dogs are natural pack animals. In the wild, they rely on each other for protection and confidence.

The same applies to domesticated life, too. You take the role of the pack leader. When another dog is added to the pack, your pup will feel far more confident than ever before.

This can help prevent timidness. In some cases, it can even decrease the chances of aggression in uncomfortable situations.

The Cons of Getting a Second Dog

With so many great benefits of getting a second dog, it's hard to imagine any negatives! But, there are some serious concerns to think about. These cons won't apply to all dogs. However, they are certainly possible.

The biggest potential issue is the lack of compatible personalities. Dogs are just like humans in the sense that not all dogs are getting to get along with everyone. It's just a fact of life!

If your dogs don't get along, you could encounter some serious aggression issues. Infighting in your home is not something you want to deal with. So, you need to think about your dog's behavior and how they would react to having another dog in the mix.

Related: Why a Younger Dog Might Attack an Older Dog

While a second dog can do a lot to help resolve certain behavioral problems, it can also create more.

Even fears are fluid enough for dogs to learn. There are plenty of cases of perfectly confident dogs suddenly growing scared of strangers because they saw how the dog reacted.

It's a tricky issue that you have to work hard to avoid. You should always train out bad behaviors in your first dog before attempting to get a second one.

Ever try to train two dogs at once? It's a nightmare!

Dogs need one-on-one attention to truly grasp training concepts. Second dogs can become a negative distraction very quickly. Always train your first dog before you get a second one. When the first dog is well-trained, they may help "teach" your new pup.

Dogs can get jealous, too!

Some canines can have a real problem sharing things. This is more common in older dogs. If a dog has been alone in your home for years, they might not want to share it with another stranger. The same applies to you! All of the attention you're going to show your new dog could be a real problem for jealous pooches!

Jealousy can lead to bad behavioral habits and possible aggression, so it's something to be wary of.

Tips for Getting a Second Dog

Don't take the previous cons as us trying to sway you out of getting a second dog. Getting a second pup can be very rewarding and beneficial all around! But, it's not for every family.

If you do decide to get another furry family member, there are some things you can do to ease the transition and ensure success.

Many dog owners believe that age is the most important thing to match. That's not the case. 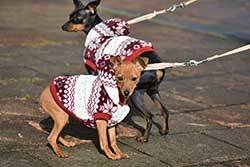 Activity levels and overall health are most important. When two new dogs meet for the first time, there's an almost instant battle for dominance. They may not show it, but they're gauging each other out to see where they lie.

If you have an older or injured first dog and a youthful new dog, you're already creating an imbalance. Your new dog will quickly dominate your first one.

As for activity level, the main issue there is lifestyle and personality. You can't expect a lazy dog to suddenly love one that likes to run around all day! Keep the personalities and lifestyles similar and your dogs should get along swimmingly.

Related: What Are the Best and Worst Dog Breeds for First Time Owners

The best time to adopt a new dog is when the first one is about two or three years old. This gives your first dog plenty of time to complete training and feel some of that one-on-one love. But, your dog's mind is flexible enough to accept change!

Older dogs tend to have a harder time accepting new canine family member. They can eventually overcome their issues, but it will take some work.

The best course of action is to get the opposite gender. A male and female dog pairing is much more likely to get along than two males or two females.

Males can get territorial. Curiously enough, female pairs are the most likely to show aggression!

While it's tempting to adopt two littermates, avoid doing so. Littermates are more likely to bond with each other than you. This can create some strange power imbalances that lead to training difficulties and aggression.

Don't just bring your new dog home and expect things to work out immediately! It takes time for your first dog to get comfortable with the newbie and vice versa. Consider introducing the new dog through glass first. You can also keep them separated from different kennels.

Once they get more comfortable, you can take away some boundaries until they are fine being together at all times.

To avoid jealously, don't forget to show your first dog plenty of love! In fact, many recommend prioritizing your first dog a bit. Again, it all comes down to the dominance thing.

Your dog isn't going to like all the attention you're giving your new dog. But the biggest problem will come when mealtime rolls around. Feed your first dog first! That shows that your new pup is no threat to their place in the pack.

There's no clear-cut answer to whether getting a second dog for your family is a good choice or not. It all depends on your dog and your personal situation!

In most cases, dogs will be much happier with an all-day companion they can play with. But, you need to consider their personality and take some time choosing the right companion. When you make this decision strategically, your two dogs will be inseparable!

Will getting a second dog calm my dog down?

A second dog will not instantly fix any behavioral problems with your first pooch. If your dog gets overly excited and neurotic at the drop of the hat, they will only pass that on to your new adoptee! It's better to correct that behavior first.

Does getting a second dog help with separation anxiety?

Separation anxiety is one thing that an additional dog can solve. Canines suffer from separation anxiety because they can't stand being alone. When you have two dogs, they're always together and can keep each other company.

Does getting a second dog help with socialization

A new dog can absolutely help with socialization. But, it will only work to some extent. Socialization is all about getting exposed to new people and animals. It's crucial to do this early on to avoid socialization problems as an adult.

A second dog can get your first dog more comfortable with the presence of another animal. But, there's still plenty of work you need to do to fix socialization issues.