You’re probably here seeking help because you were standing in utter disbelief as your ‘cute’ younger hound was barking their lungs out at your older dog initiating a doggo version of ‘World War III’.

But if you’ve got nothing to do with dogs and just-here-for-some-info, welcome, and consider yourself lucky.

To be frank, inter-canine aggression doesn’t represent the vast majority of all dog relationships. However, if you’re one of the unfortunate folks whom their peace’s been awfully snatched away, you’re in good hands. We're here to help.

What Are the Symptoms of Dog-dog Aggression?

Not only outright attacks, but also other behaviors may be indicators of lurking hostility and aggression in your perpetrating dog.

These behaviors include the following:

These aggressive behavioral patterns may also be accompanied by fearful or submissive body postures and expressions like crouching, tucking the tail under the body, licking lips and backing away.

What Are The Causes of Dog-dog Aggression?

Did you know that 70% of the time, the perpetrator dog is usually the one that’s been recently brought into the house? Also in 74% of the cases, the younger dog often is the one who starts the fight. But what is it about the younger-older dynamic that attracts trouble? It may be due to the following:

-- The Older Dog Is Sick

As dogs age, they may develop many issues, including painful conditions. This can impact their relationships with their fellow in-mate hounds. Here’s how.

Some dogs may develop problems with movability, get plagued with extreme fatigue and malaise. This may lead to the older dog not being able to physically escape from an uncomfortable social setting with the other dog by merely walking away, for instance.

Instead, the dog may resort to growling, snarling, and the likes. This may create tension between the two, one that eventually climaxes into a huge fight. 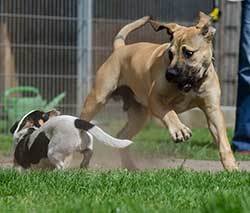 Older dogs may also develop painful conditions like arthritis. So the playful act of nudging or pawing the older dog may cause a fight to break.

As the older dog feels sheer amounts of pain, he’s usually prone to irritability, causing the tendency for violent and aggressive reactions.

Some dogs may be perfectly capable to respect the elder dog’s personal space and boundaries, but others just simply can’t cooperate and thus, a fight ensues.

Dogs with painful conditions may constantly whine, or vocalize their agony. This stimulates anxiety in a younger dog. While not all dogs do so, some snap and may attack these vocal dogs out of stress and fear.

Dogs are very social creatures, they send lots of signals through facial expressions and body language to further communicate with the recipient be it human, or a fellow canine.

If, due to age, the dog starts to suffer from issues hindering his eye-sight or hearing, he may be unable to recognize signals sent to him by the other hound. Again, causing trouble.

Some old dogs may suffer from a decline in cognitive abilities, possibly due to Canine Cognitive Dysfunction or other diseases.

Canine cognitive dysfunction is very much akin to Alzheimer's in humans. Dogs with such a disease are prone to bouts of confusion, and being ‘zoned-out’.

Again, this may lead to the inability to properly interpret social situations, and to respond to them, which may prove cumbersome to building a good relationship with the younger dog.

A younger dog may witness an older dog’s seizure and feel very distressed and scared. This may lead to the younger one attacking the older dog as a means to eliminate his fear. The younger dog can’t perceive that a seizure is an out-of-hand situation.

-- The Younger Dog May Be Sick

While younger ones are usually healthy, some may develop neurological diseases or even thyroid gland diseases like hypothyroidism that cause irritability and aggressiveness.

This is pretty basic, but it’s a real deal-breaker with both humans and dogs, right?

So imagine you’re showering your older dog with attention, maybe to console him due to his sickness, or just a personal inclination towards him. This is definitely bound to cause issues of inferiority within the younger dog, which will lead to him taking it out on the older one.

7. Fighting Over Food and Resources

A study conducted on 38 pairs of dogs in the ‘Animal Behaviour’ clinic at Tufts University’s School of Veterinary Medicine in Massachusetts has shown that 46% of the sample size has exhibited aggression due to conflict over food.

This conflict was usually instigated by the younger dog. Younger dogs tend to behave this way especially when they reach social maturity which is equivalent to the age of 18 in humans (at the age of 12 to 38 months in doggies).

At this age, they may attempt to re-shuffle the pre-existing dynamic of ‘who’s the boss’ and ‘which dog gets most of the resources’.

Is There Anything You Can Do About It?

We’re aware that a dog fight is a very scary thing, and that stopping it is even scarier. A lot of owners may have to jeopardize themselves to stop such fights, with many getting injured as a result.

So before things can escalate that way, we’ll introduce you to some tips that’ll aid you in restoring peace in your house.

What we mean by this, is that you’ve got to let all your doggies know that you’re the leader here. Affirm your position so that the younger dog recognizes your role as the pack leader.

Stand in front of your younger dog. Calmly, but confidently walk towards him to urge him out of the area your older dog’s sitting in. Once he obediently stays away, make sure to reward him. But not in front of the other dog.

Play a lot with your younger dog. Exercise him and take him out on numerous walks. This will help trim off his enormous energy so that he stops pestering his elder.

Try to include both dogs in your walks if possible to maintain the ‘I’m your leader’ image. Try to keep your younger dog occupied as much as possible. If he’s a ‘herding dog’ or a ‘scent hound’, whatever his breeding is, make sure to encourage its growth.

If you see both dogs preparing to start a fight, scold them both. Equally. Don’t sympathize with one and leave out the other. This will cause many issues in the long run.

Try to expose your younger dog to other dogs of a similar age group so that he socializes and makes friends.

Train Your Younger Doggy to Ignore the Older One

Once you notice your younger dog approaching his elder, call him out, play a game with him. Distract him by all means possible then reward him. Repeat this several times.

Also, teach your younger doggy commands that prohibit him from going near his elder.

Separate Them When Unsupervised

Be sure to separate both dogs. Especially if they’re still a bit out of control. You never know what kind of fight may start with you not there, and what kind of damage it may do.

Dogs are extremely loyal creatures, they possess raw, pure emotions towards their owners. We’d say that a dog is a lifetime friend and a blessing in one’s life. Sometimes, having multiple dogs may cause some turbulence, but with correct coaching and training, things will get fixed in no time.

The most important thing of all is to love all your doggies equally!

Also Read: The Reason Why Dogs Hate the Mailman