Who owns pets today? Just about everyone, if you can believe the sometimes conflicting yet always riveting data from an ongoing series of studies, surveys and research into pet ownership in America.

While you won't find any unified consensus as to just how many pups, kitties, fish, reptiles or farm animals share their lives with individuals and families all across the United States, what you will learn is this: more of us choose to keep pets than not, and those of us who do keep pets clearly love our pets to distraction. 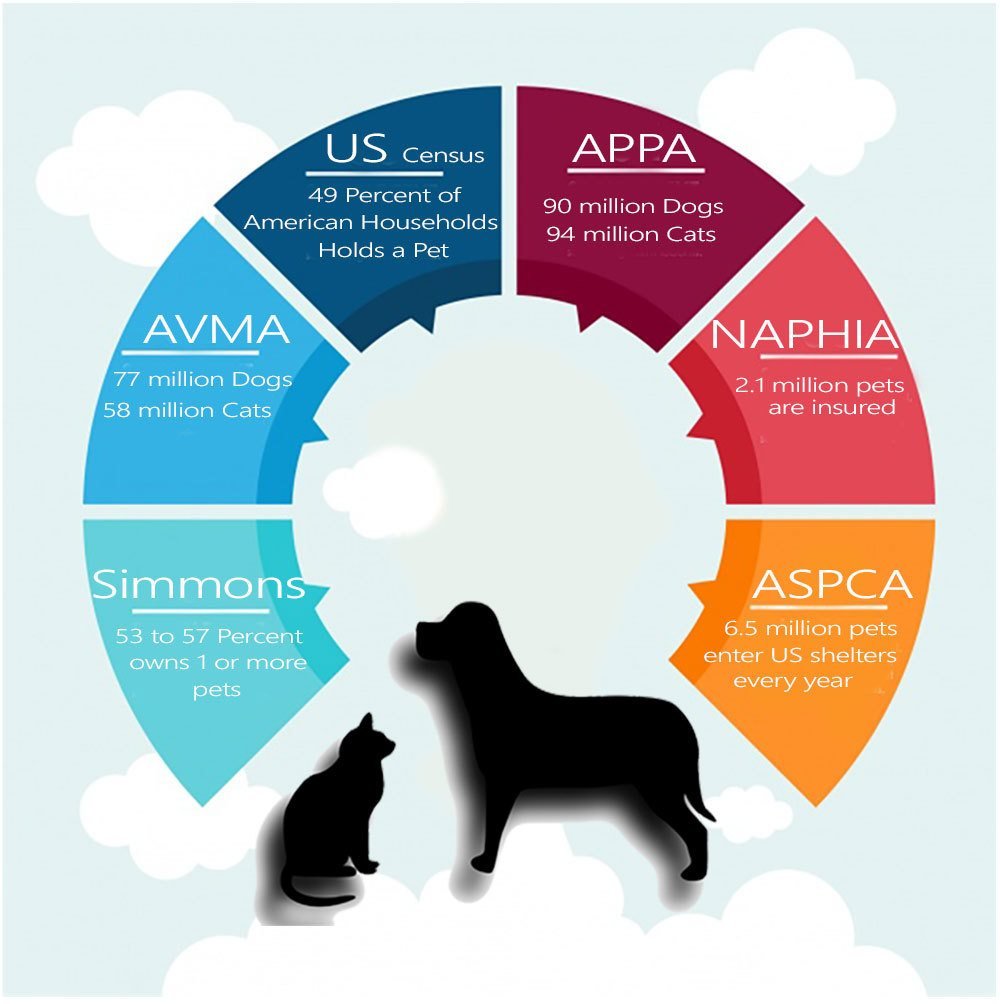 Each of these organizations has their own take on US pet ownership statistics for reasons that relate to their governing purpose and goals, primary clientele or membership, survey methodology and other factors.

The APPA is perhaps the best known of the pet ownership reporting entities in the US. This not-for-profit organization caters to the needs and interests of pet products and services businesses.

According to the APPA's latest market research, 68 percent of US households include at least one pet.

The APPA states that US pets include 90 million dogs and 94 million cats. They also produce an annual video overview to highlight important statistics from each year's survey.

Generation Y and Millenials (born between 1980 and 1994) comprise a full 35 percent of pet owners nationwide. For respondents in this age bracket, 43 percent of non-pet owners say they want to or plan to own a pet in the future.

The AVMA is the governing association for professionals in the veterinary industry. According to the AVMA's latest survey, 57 percent of US homes include at least one pet.

The AVMA states that US pets include 77 million dogs and 58 million cats.

The American Association for the Prevention of Cruelty to Animals (ASPCA).

The ASPCA reports exclusively on the state of pet relinquishment, adoption and euthanasia nationwide. Their surveys are performed independently in-house and are unaffiliated with any other government or private organizations.

The ASPCA also assists with reuniting lost pets with their owners - up to 710,000 pet/owner reunions are facilitated annually.

The U.S. Census Bureau's primary goal with the American Housing Survey is not pet ownership-related, but rather home-ownership related.

The Bureau includes questions about pet ownership as part of a broad range of questions. Some researchers believe this approach encourages more non-pet owners to participate and may deliver more accurate data. This survey is also conducted face-to-face and in person, which improves response rates up to 81 percent.

The most recent survey suggests 49 percent of American households include at least one pet. No data was collected on pet type.

The Simmons Study uses data available through the U.S. Postal Service to randomly survey a wide variety of households annually by mail or phone.

This study, like the Census Bureau study, does not focus on pet ownership, but rather includes these questions as part of a broader data collection effort to better understand consumer trends.

Most recently, Simmons reported that data suggests a range of 53 to 57 percent of households include at least one pet.

NAPHIA reports exclusively on the growing pet insurance market and statistics about insured pets and their owners.

Who Owns What: US Pet Ownership Statistics

Dogs and cats will likely always be the dueling favorite pets in the nation. Interpreting which species is most popular can be dicey - some surveys slant towards number of households that contain a specific species (for instance, either a dog or a cat or both) while other surveys focus on counting up the actual number of each species in that household (for example, one dog and three cats).

So let's take a look at how the numbers stack up by number of pets and species of pets.

The Insurance Information Institute (III) analyzed the APPA's most recent survey to arrive at these numbers regarding pet species and population:

Number of U.S. Households that Own a Pet By Type of Animal

Here, it is important to remember that many other pet species are popular in the US today besides those main categories listed here.

Farm animals and birds, birds of prey, rare or unusual exotic species, pet insects (tarantulas and hissing cockroaches are popular) and marine life may be under-reported or simply not reported.

How Pet Owners Regard Pets 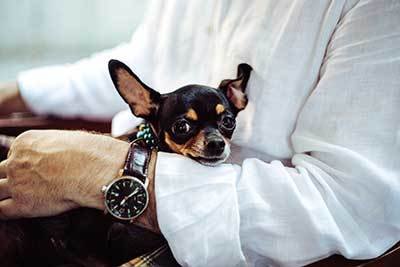 The phrase "part of the family" has become near-synonymous in the pet industry today.

A whopping 90 percent of pet owners - and not just owners of "typical" pets like cats and dogs - report their non-human family members are full-fledged family nonetheless.

But perhaps no statistic says it better than this one: when surveyed, more than half of adults say they would choose a pet over a person to be stranded with on a desert island.

Leading industry editorials also indicate pets can work wonders in the workplace, from reducing stress to improving morale and productivity and boosting the corporate bottom line.

Perhaps most compellingly, APPA surveys show that a full 81 to 85 percent of pet owners regard their pets as a reliable daily go-to resource for affection, unconditional love, stress relief and relaxation and improved overall health.

Why Doesn't the Data on Pet Ownership Match Up?

As one rather gripping editorial recently reported, different pet service industries each have their own take on current pet ownership statistics and trends. 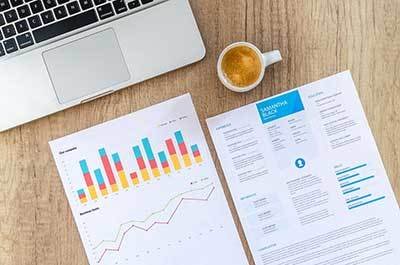 As well, most experts agree that pet owners are simply more likely to respond to a survey about pet ownership - a topic in which they are deeply interested - than are non-pet owners.

There is also the undeniable influence of Google algorithms in choosing which survey data regularly appears topmost in the browser's search engine results. Data that is displayed more frequently tends to get reported more frequently and thus codified into fact.

This means the best way to use current available data about pet ownership may not be to follow one reporting organization's survey results uniformly, but rather to take a broader-brush approach, averaging results across different surveys to arrive at a general overview of pet industry and ownership trends.

Anticipating What the Future Holds for Pets and Pet Owners

As is now clear, there is some remaining confusion, even disagreement, over the exact number and species of pets cohabitating with their people around the country today.

But what is crystal clear is that pet ownership is of great interest to a great many people and is here to stay. For those in doubt, even the most casual glance at a 17-year trend timeline of dog ownership in America can readily clear this up.

The rising popularity of so-named "exotic" pet species is also evident. The AVMA's survey reports that between 2011 and 2016, ownership of exotic pets increased by 25 percent to 13 percent of households.

By slicing through some of the statistical ambiguity between varying pet industry reporting organizations, what we are left with is the slow and gradual, yet continual uptick in the popularity and significance of pets and pet ownership in people's lives today.

This ultimately bodes well for pets and their people across all walks of life.

Top 5 Best Outdoor Dog Gates For Your Deck or Porch

Top 5 Best Outdoor Dog Gates For Your Deck or Porch

The Ultimate Pet-Friendly (Back) Yard for Dogs Guide

The Ultimate Pet-Friendly (Back) Yard for Dogs Guide

Do Dogs Have Belly Buttons? What Do They Look Like?

Do Dogs Have Belly Buttons? What Do They Look Like?

22 Best Dog Christmas Gifts for 2020: Presents Your Pooch Will Love!

22 Best Dog Christmas Gifts for 2020: Presents Your Pooch Will Love!

How To Measure Your Dog for a Harness, Coat, Sweater, Collar or Muzzle

How To Measure Your Dog for a Harness, Coat, Sweater, Collar or Muzzle

How to Convince Your Parents to Get a Dog: 7 Benefits of Owning a Dog

How to Convince Your Parents to Get a Dog: 7 Benefits of Owning a Dog

Top 7 Best Artificial Grasses for Dogs .. (or any other pets)

Top 7 Best Artificial Grasses for Dogs .. (or any other pets)

17 Big Fluffy Dog Breeds to Love and Cuddle With

17 Big Fluffy Dog Breeds to Love and Cuddle With

Dog Bike Baskets: Best Options Based on Size & Weight of your Pooch

Dog Bike Baskets: Best Options Based on Size & Weight of your Pooch

Malamute Puppy: 12 Things to Know before Getting an Alaskan Malamute

Malamute Puppy: 12 Things to Know before Getting an Alaskan Malamute

When Do Yorkies Stop Growing?

When Do Yorkies Stop Growing?

How Much Does a Pomeranian Cost?

How Much Does a Pomeranian Cost?