Ask any dog owner what their biggest fear concerning their furry friend is, and most will tell you that it's losing them outside of the home. Most owners these days let their pups roam free inside the home and yard. But what if they manage to wiggle their way under a fence and get lost?

According to the American Humane Association, that fear is completely founded. The foundation estimates that about 10 million household pets are lost or stolen every year! It happens all the time despite all of the available precautions.

There's a lot of unique technology out there to help you keep tabs on your dog. One form of technology that many owners are interested in is GPS. A GPS microchip implant for dogs seems like the answer to all of the "Lost Dog" woes.

GPS technology is already prevalent. Most of us have GPS on our phones and in our cars. So that begs the question, does a GPS microchip implant for dogs exist?

Microchip with GPS Tracker for Dogs

We hate to burst your bubble, but this type of GPS technology does not exist just yet. If you see any product claiming to be an implantable GPS tracker, it's nothing but a work of fiction!

There are many ways to monitor your dog's location, but precise global positioning isn't possible at the moment.

With all of the great technology available to us, you'd think that implantable GPS was a thing. However, several factors are holding this type of gear back.

The first is Mobility. GPS is accessible around the world. Not only that, but it's free to tap into. Some operators charge a monthly fee to use GPS, but using the satellites is technically free of charge.

So, why is mobility an issue? Well, it requires power to connect to satellites! GPS tracking is a pretty power-intensive task. Even your smartphone uses more power when GPS is turned on. 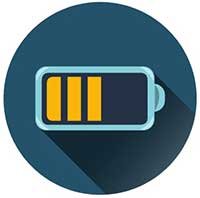 When you're talking about implantable devices, power is a huge problem. Sure, you can install batteries. But if you are using active tracking technology, any battery will deplete in only a matter of days.

What then? How would you charge the implant?

Another big hurdle is the size of the GPS chip itself. GPS chips are shrinking pretty fast, but they're not small enough to be comfortable under your dog's skin yet.

At this stage in the tech game, implanting GPS chips into a living creature is not plausible or even practical.

What About Current Implanted Dog Chips?

Microchipping is quite popular nowadays. First patented in the 1980s, microchipping became standard in the 1990s. Today, it's one of the first things new owners get done alongside the first vet visit.

While useful, current implantable chips are not the same as a microchip with GPS tracker for dogs. Modern microchips rely on a completely different technology.

They use RFID, or radio frequency identification technology. The chips are comparable in size to a grain of rice! Using a special syringe, vets will implant it underneath the skin.

The electronics are housed inside a glass or plastic capsule so that they will stay in place without any issues throughout the dog's entire life.

Whenever a lost dog is captured, one of the first things vets will do is check to see if it has a microchip. Several microchip databases exist out there, but vets can cross-reference different systems to find the included numerical code.

The numerical code is attached to a specific profile, which has your contact information on it. To gain access to the code, vets will utilize an RFID scanner. They can hold it close to the implant, and Voila! Just like that, they'll know who to call to retrieve the dog.

Modern-day microchips do not rely on GPS technology. They're far too small to house that kind of equipment. Plus, they don't contain any power!

Everything is done with the information retrieval device, so there's no way to track where your dog is in real-time. The only way to use it is after they get lost and are found.

While microchips can give rescuers information about a dog's owner after they are caught, modern GPS trackers tell you where your dog is at the moment.

They are the closest you're going to get to a GPS microchip implant for dogs. However, these devices aren't implanted at all. Instead, they act as dongles that you fit onto a collar.

The dongle is considerably larger than current microchips. Again, technology is quickly advancing to make them smaller. But for now, they're far too bulky to put under the skin. Plus, they require recharging to work properly!

So how do GPS trackers work?

It all depends on the system.

Most rely on features like geofencing. With geofencing, you can place an invisible barrier around your home. If the collar is found to go outside the confines of the barrier, you'll receive an alert!

After that, the tracker might connect to GPS satellites to triangulate the dog's position. However, even that is too fancy for most of the systems on the market today.

Most will connect to GSM towers or nearby cellphones that have the same app installed. As you can guess, the technology isn't as accurate as full-blown GPS tracking.

It can be several meters off. Unless you are close to GMS towers, you may not even get an accurate representation of where your dog is at all.

Current GPS trackers are certainly useful for getting a general idea of where your dog is. But, it's not foolproof. The technology isn't there just yet to provide the pinpoint accuracy that most are after.

We're getting closer and closer to implantable GPS tracking for dogs. But as of 2021, it's nothing more than a work of fiction!

Modern microchip implants are a fantastic security blanket that every dog owner should consider. While not capable of tracking in real-time, they will ensure that your dog is returned to you if they are captured.

GPS collar trackers are great, too. But, they don't have an accurate response or a universal communication system. They're fine if you want an added layer of protection, but don't expect things to be on-the-nose.

We do not doubt that we'll one day have a microchip with GPS tracker for dogs. But until that day comes, we'll have to use a combination of microchipping, GPS collars, and good security methods to keep our canines safe.