How to Make your Dog Howl (w/ Sounds)

Howling is something that just comes naturally to many dogs. This behavior can be traced all the way back to their ancestors. Wild canines use howling as a form of communication. It comes with the territory of being a part of a pack.

Despite all of these natural instincts, it's not always easy to get a domesticated dog to howl on command. Dogs can bark, whine, and grumble all day long, but howling is a bit rarer. Some breeds, such as Hounds and Siberian Huskies, are more prone to singing now and again.

However, other breeds need a bit more coaxing.

If you're trying to teach your dog to howl, you're going to need to have a lot of patience.

This trick isn't like shaking hands or rolling over. Dogs have no idea what the words "Howl" or "Speak" mean. As a result, you can't just tell your dog what to do and expect them to understand right away.

- *  The key to mastering this trick is to understand why they're howling and to find a trigger.

Why Do Dogs Howl?

There are many reasons why your dog might start howling. Understanding these reasons is an important first step on getting them to do it on command.

Has your dog ever started howling while you were away? If so, your dog may be experiencing separation anxiety.

You see, in the wild, canines will use howling as a way to communicate with other dogs that might have gotten separated from the pack. It's a way of guiding that lost dog back to their family.

When your dog howls when you're not at home, they're essentially doing the same thing. They're scared that you might not come back and are starting to experience feelings of anxiety. So, they'll howl and hope that you respond or find your way back to them.

Sometimes, howling occurs just because they're bored. It's the same reason why many dogs start barking out of nowhere. They're trying to capture your attention so that you focus on them and cure them of their boredom!

If you respond to your dog's howls, the behavior will only continue. Responding to their cries for attention is basically the same as rewarding them, so they'll continue to do it anytime they get bored. Another reason why dogs howl in the wild is to warn their pack of a potential threat. Howls can be heard from quite a long distance, so the act is used as a warning.

This happens a lot with domesticated dogs as well, especially those that are protective of your home.

Your dog might start howling anytime they hear the mailman approaching. Sometimes, howls are mixed in with the occasional bark as well. Either way, it's all just a way of warning you that something or someone is coming.

Responding to a Call

Many times, dog owners won't hear a peep out of their dog until a siren comes roaring by. Emergency sirens from police cars, ambulances, and fire trucks are notorious for turning on a switch in dog's brains.

This is because the sound is very close to that of a canine howl. Other high-pitched sounds often result in the same behavior.

When many dogs hear this sound, they'll start to howl instinctively as a response. To them, it sounds like another dog howling off in the distance. So, they'll howl back to let that "dog" know that he or she has been heard.

Unfortunately, howling can also have some negative connotations as well. The behavior may be used as a display of distress. When dogs are hurt, they cry out to their pack for help. It's a survival instinct, as injured dogs are more vulnerable to predators.

Modern domesticated dogs may howl due to pain that they're feeling. If you suspect that this is the case, it's a good idea to take your pup to the vet as soon as possible.

Even if you don't see anything physically wrong with your dog, they may be suffering internal pain. A vet can perform a thorough diagnosis and find the problem. Use that cry for help to get your dog the assistance they need.

If you have a dog with a high prey drive, you may notice that they howl whenever they see something out of the ordinary. This could be a stray cat out on your daily walk or a rogue squirrel daring across your path. This type of howling is a method of alerting you to the prey.

Dogs will often do this when they're on the hunt. It's a way to alert the rest of the pack that they've found food. Hunting dogs will do this to assist their owners as well.

If your dog hears another dog howling, they may start imitating them as a way to have fun. Have you ever wondered why you always hear more than one wolf or a wild dog howling in the night?

It's their way of bonding and strengthening their relationship. Those canines are sharing that moment together.

Sounds That Will Make Your Dog Howl

Now that you know why dogs howl in the first place, you can use this information to your advantage. As mentioned earlier, training your dog to do this behavior on command is all about finding their trigger.

You need to figure out what it is that will make them start singing. It's different for all dogs, so it's a process of trial and error. Here are some sounds that are known to get dogs going.

The first thing you should try out is the sound of your own voice. Make a howling noise or start singing your favorite song loudly. Hopefully, your dog will join in with you on the fun.

This goes back to bonding. If your dog sees you performing, they may want to howl back at you. You are the pack leader after all.

Instruments like the guitar, harmonica, and even cello have been known to trigger dogs. The high-pitched sound does something to their brain, making them want to join in.

Whip out your instrument and experiment with a few different notes. If you don't have an instrument, you can also use recordings. Work your way up the scale, holding the tones for few beats before moving onto the next one.

If one of those notes is your dog's trigger, you'll know it pretty quickly.

When your dog starts howling, stop playing the note and see if your dog continues. You can try to match the note with your voice and try to get your dog to follow along with your singing.

Your furry friend doesn't have to be a Hound Dog to start singing to Elvis! Dogs can connect with certain types of music and start howling along. There's no rhyme or reason to what types of songs will initiate howling and what won't. 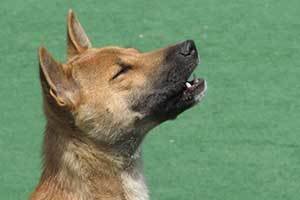 Some dogs prefer the sonic qualities of disco while others like the more melodic nature of opera. Whatever the case may be, you can try to figure it out by playing a wide variety of songs in your home.

Put the music on loud enough for them to hear clearly. Then, play random songs and see what your dog responds to.

If they stay calm and quiet with one genre, try the polar opposite to see if that gets a response.

The moment your dog starts to bark, whine, or howl at a song, stick to that style of music and encourage them to be a bit more vocal. Try singing along too to get the howling started.

Chances are, you already know whether or not your dog is triggered by sirens. When dogs howl to sirens, they're responding to a perceived howl. Dogs who do this typically do it each and every time a siren is within earshot.

If you're unsure, play a few sirens sounds on your phone and see how they react. There are a few different siren pitches out there, so try them all out to get your dog's attention.

Sounds of Other Dogs Howling

If all else fails, there's always the power of canine persuasion. You can find videos and audio clips of dogs howling all over the Internet.

Play a couple of them through a loudspeaker in your home. Hopefully, your dog will think that it's another pup in the vicinity trying to communicate. If so, they may howl in response.

Figuring out what makes your dog howl is only half the battle. After that, you have to reinforce that behavior so that he or she knows its something you want them to do.

To achieve this, you need to have plenty of treats on hand.

The moment your dog starts barking, you should say your verbal command. You can choose something like "Sing" or "Howl." Then, give them a treat and plenty of praise. Repeat this process a couple of times before giving it a rest. Your dog won't get it the first day, so be patient.

On another day, you can turn on the same trigger and go over the same process of giving your command and a reward. Once you think that your dog is ready, you can move onto slowly removing the trigger.

Try shutting off the sound immediately after they start barking. Eventually, they'll learn that you want them to howl and will start to do it whenever you want them to without the original sound that got them to start.

Howling is a great way to bond with your dog. They'll love singing with you and enjoy every second of attention you and all your guests give when they do it successfully.

With all that being said, it's important to be careful with this trick. A dog's howling can get out of control pretty fast.

Make sure that you praise your pup every time they do things right and ignore any unwarranted howling. Like all other forms of training, you need to remain fair and vigilant to ensure that your dog retains their new skills while remaining respectful.