For us humans, chicken broth is something that's often used to craft hearty dishes. It's viewed as comfort food that's as delicious as it is nutritious.

Because of its strong aroma, you may have noticed your dog eagerly watch you take every sip, hoping that some fall on the ground for them to lap up.

It's a pretty natural reaction, considering that broth is made up of a lot of stuff that's in their normal kibble. If you're tempted to give them some, you may be asking yourself,

"Can dogs have chicken broth?"

Is Chicken Broth Safe for Dogs?

Good news! Chicken broth is safe for your dog to consume. It's essentially chicken-flavored water that's been enriched with all the nutrients and minerals that come from the animal.

In most cases, there are no unwanted side-effects to worry about. In fact, chicken broth is a great dietary option for those canines who suffer from allergies.

As long as your pup doesn't have a chicken allergy, chicken broth can be a great way to introduce healthy minerals into your dog's body.

What About Store-Bought Broth?

With all that said, you still need to be wary of broths you get at your local supermarket. Most of those products are made for human consumption.

As a result, they may have some ingredients that aren't the best for your pup's digestive system. They may also have a lot of salt, which is typically used to enhance the flavor for human palates. Too much sodium can lead to a host of health issues for your dog.

If you want to save yourself the trouble of making broth on your own, you can purchase a pre-made alternative at the grocery store. However, you need to scrutinize that ingredients list and make sure that's it doesn't have any added salt or artificial preservatives.

The best options for your furry friend will be organic and free of GMOs.

Is Chicken Broth Good for Dogs?

Now that you know it's safe, is chicken broth good for dogs? It's typically viewed as a healthy meal for us humans that's used to cure colds and other ailments.

Well, you'll be happy to know that your dog can experience a lot of those same benefits, and then some. Here are some ways it can enhance your dog's health.

Benefits of Chicken Broth for Dogs

If your dog regularly has gastrointestinal problems, chicken broth may also provide long-term benefits. It can prevent leaky gut, ensuring that your dog's system is capable of digesting standard kibble without missing a beat.

Broth is chock-full of healthy amino acids, including glycine. Glycine is essential for proper kidney and liver function.

The added boost of glycine from the chicken broth supports these organs, ultimately helping them do their job to flush out unwanted toxins from your dog's body.

Because chicken broth is made from the bones and cartilage, the liquid can also support your dog's joints. It's a great source for glucosamine and chondroitin, which have been shown to support overall joint health.

They're often recommended for older dogs that suffer from arthritis, hip dysplasia, and other health issues. Instead of paying for expensive supplements, you can enrich your dog's meal with chicken broth.

Your dog can never get enough healthy minerals. If your dog's normal food isn't providing them with the minerals they need, chicken broth can fill the gap. It's rich in calcium, silicon, magnesium, and phosphorus, among other things.

One of the best things about chicken broth is that it's incredibly easy to make. All you need is a large pot and some time. If you have a slow-cooker, the process is even easier. Chicken broth is best when it made slowly, so having a cooking tool that you can set and forget is ideal. 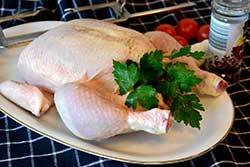 The first thing you'll want to do is collect your basic ingredient, chicken. You can use a small whole chicken. With a whole chicken, your dog can get the benefits of all its organs and meat.

Alternatively, you can just use bones. The bones are the most important part of the broth. The bones contain all the minerals and healthy stuff.

Many owners choose to use bone-rich parts of the chicken, such as the feet and neck. You can even use bones from big holiday meals.

A few tablespoons of apple cider vinegar is the key to making a delicious broth. The whole point of a broth is to enrich the water with the meat's flavor and nutrients. You want the water to turn into a thick, gelatinous liquid.

The vinegar helps to accomplish this. It pulls all of the minerals and nutrients out of the chicken.

Vitamin-rich vegetables can enhance the broth further. You can add leafy greens like kale, kelp, or herbs. Alternatively, you can throw in some celery, carrots, or green beans. Even if your dog doesn't normally like plant-based foods, they won't even notice them as they eat the broth.

Once you have your ingredients collected, it's time to get cooking! Place all of your bones and meat-based ingredients into the slow cooker pot. Then, add water. The bones should be covered by about two inches of water.

At this point, you need to add the apple cider vinegar. You should add between two and four tablespoons of vinegar, depending on how large the pot is.

You don't have to be exact. Don't worry, the vinegar will not affect the taste after the broth is done the cooking.

Cover the broth and let it cook on the lowest setting for a full 24 hours. During the course of the day, the bones will soften as the minerals are pulled out. If you want to make the broth even more flavorful, you can let it cook for up to three days.

If you don't have a slow cooker, you can cook it the broth on a stove. Use a large stock pot and let the broth simmer for an hour. Stove-top cooking is a quicker method, but the final product won't be as enriched and flavorful than if you use a slow cooker.

After the ingredients have created a rich broth, you can turn off the slow cooker and remove the bones. It's important that you discard of the bones safely. They should not be fed to your dog.

Chicken bones will splinter after cooking, creating a choking hazard for your dog. Once every last bit of bone is gone, you can add any vegetables.

Now, let the broth cool down to room temperature. After that, pop it in the refrigerator. The broth needs to separate a bit before you provide it with your dog.

Chances are, your broth will be quite fatty. You don't want to give this fat to your dog, so you need to let the broth get cold so that the fat separates from the rest of the broth.

After a few hours in the fridge, you'll notice a hard layer of fat on top. Remove the fat layer and toss it out. At this point, you should have a nice, gelatinous broth that's ready to be eaten!

You can store it in the fridge for up to three days. In the freezer, it can last for up to a year. It's a good idea to separate it into smaller portions so that you don't have to defrost a large pot every time.

Pour some broth into small containers and ice cube trays for easy snacking.

Tips on How to Feed Your Dog Chicken Broth

With its rich flavor and strong aroma, you won't have any issue getting your dog to eat chicken broth. However, it's also a very versatile food that can be used a number of ways.

The easiest way to feed chicken broth to your pup is to simply pour it in their bowl and let them lap it up as they would water. Many owners do this to give their pup a boost of hydration.

Water is essential for good health. Despite having a bowl of refreshing water at their disposal, not all dogs get enough water every day.

Chicken broth can be used to rehydrate your dog. The added flavor of the chicken will encourage your dog to drink. Not only do they get to enjoy the flavor, but you can rest easy knowing that they have all the hydration they need.

Another great option is to add broth to your dog's standard kibble. Dry dog food will soak up the broth, adding plenty of flavors. It's a common technique used by owners with picky canines.

Instead of having to switch formulas, you can give bland food a flavor boost that has your pup salivating. The broth will also soften the food, making it ideal for canines who suffer from dental issues as well.

Want to give your dog a cool treat after a day of playing out in the hot sun? Frozen chicken broth will do the trick. While cold chicken broth may not sound all that appetizing to us, it's something that will have your dog jumping for joy.

Just pour the broth into some ice cube trays and put it in your freezer overnight. Come morning, you'll have small, bite-sized chicken broth chews that will cool and hydrate your pup.

If you make all of your dog's homemade meals from scratch, chicken broth can prove to be a very useful ingredient. It can be used to make stews, flavored rice, and host of other dishes.

The broth will act as a crucial tool for combining other ingredients while also giving your dog all the health benefits they need to thrive.

Chicken broth is an easy and versatile food that your dog will love. Use it to spice up their meals or give it to them as a cool treat on those hot summer days.

Either way, your dog will enjoy the meal while experiencing all the benefits chicken broth has to offer.