Can Dogs Taste Spicy Herbs in Food, & Do They Like It?

Spicy herbs and flavors in cuisine are pretty divisive. You either love them or you hate them! When humans eat spicy foods, we experience much more than just some heat in our tastebuds. We have a physical reaction that can vary from a simple burning sensation to full-on sweats!

But what about dogs?

Dogs have a knack for eating some of the grossest things imaginable. Yet some are picky and avoid top-shelf foods. It can make you wonder: Can dogs even taste spicy herbs?

Ever wonder why it is that dogs can eat gross things like trash and feces without missing a beat? Well, it's because they have fewer taste buds than we do!

To put it into perspective, dogs have about 1,700 taste buds on their tongues. Meanwhile, we humans have about 9,000! With fewer taste buds, there are fewer flavors that dogs can pick up. They're less sensitive to extreme flavors.

Not only that, but they taste things a bit differently. Make no mistake: flavor matters for dogs. They're more likely to gobble down a flavorful gravy than a stale kibble. But, canines are unable to distinguish different flavors.

For example, they don't really know the difference between chicken and beef. The only thing they're aware of is that the meat is good!

The only exception to this rule is water. Dogs have special receptors on the tip of the tongue to help them understand if a water supply is healthy or not to drink.

Can They Taste Spice?

While they don't have as many taste buds as us, that doesn't mean that they can't feel the heat. That's because spicy herbs don't produce a "taste" so to speak. When you eat spicy foods, the heat you feel isn't from the flavor itself. Rather, it's from the Capsaicin.

Capsaicin is a chemical compound that's responsible for triggering those chemical reactions on our tongue. It forces nerves on the tongue to send signals to the brain, which results in that burning sensation you feel.

Dogs can experience the effects of Capsaicin, too. Canines will respond to it in a very similar fashion to humans. More on that later.

Not only can they feel the effects of that chemical compound, but they will also respond to the bitter or sour taste that comes with it. Most spicy herbs have a naturally bitter taste. It's something that dogs detest!

Take a look at any spray deterrent product and you're bound to see some ingredients that create a bitter taste. That's why those products work so well. They create a bitter environment that dogs want to avoid.

Canines much prefer meaty and fatty flavors. Generally, they will avoid bitter and sour foods.

In most cases, you don't have to worry about dogs accidentally ingesting spicy herbs. That's because dogs can usually smell the bitterness before they even taste it.

Dogs have very astute olfactory glands. Their sense of smell is reportedly between 10,000 and 100,000 times more sensitive to that of a human. They can smell the spice much sooner than we can.

Furthermore, dogs have a unique organ along their palate that can help them get a taste of food items by simply smelling it. As a result, most will know to avoid spicy peppers or herbs before it's even presented to them.

Are Spicy Herbs Toxic for Dogs?

The good news is that you don't have to worry too much if your dog consumes something with spicy herbs. Most spicy foods are not toxic to dogs.

Flavorful herbs, however, can be toxic. Things like garlic and onion can lead to some health issues. This is especially true if your dog consumes large quantities of it.

But, spicy foods aren't going to do any major damage.

What Happens to Dogs When They Eat Spices?

Dogs hate spicy herbs and will react negatively to it. While they're not toxic, that doesn't mean that your pup will not experience negative effects. Remember: they are subjected to those Capsaicin all the same. 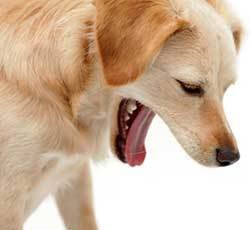 When they first eat the spice, you will notice some instant changes in body language. Chances are, they'll spit the food out immediately.

Once the Capsaicins go into effect, you might see them start panting, drooling, and whining.

Depending on the severity of the spice, your dog might start shaking its head vigorously in an attempt to make it stop. This could be followed by pacing and a lot of water drinking.

More severe symptoms may pop up after a few minutes. Your dog's eyes could start watering. Gagging, dry-heaving, and sneezing are all common behaviors, too. The pain could even make your dog start reacting erratically.

The best thing you can do for your dog is to provide some milk to alleviate the pain. Beyond that, all you can do is wait until the spice subsides. It's also a good idea to be prepared for what comes out the other end!

Your dog's body is not built to handle spice. So, expect issues like diarrhea and possible vomiting.

To sum up, dogs can feel the effects of spicy herbs and do not enjoy it one bit!

Consuming spicy food is not an immediate cause for concern. But, it will lead to a lot of discomfort for your pooch. It's best to keep your dog's meals spice-free. Keep your spices locked away and create a protective barrier if you have some growing in the garden.

There's a good chance that your dog will avoid spicy foods once they get a hint of the smell. If they do manage to eat it, they'll likely learn their lesson and avoid it moving forward!