Are Rottweilers Dangerous? 7 Common Myths about this Aggressive Breed

To those who own Rottweilers, these dogs are nothing more than just another member of the family. Unfortunately, the image of a Rottweiler has a more negative connotation to the rest of the world.

These dogs are often seen as aggressive and dangerous.

When you look at the hard facts, there is no denying that this breed has a penchant for violence.

In fact, they're typically categorized alongside Pit Bulls for their temperament. As a result, they're banned in several countries across the globe. Even in the United States, some municipalities have specific rules regarding Rottweiler ownership.

Like other aggressive breeds, there are a lot of misconceptions about Rottweilers. Whether you're thinking about adopting one of these intimidating canines or you're simply interested in learning the truth about these pups, we have you covered.

Here are some of the most common myths about Rottweilers.

First, let's address the elephant in the room. Are Rottweilers really aggressive?

Well, the answer to that question is a bit complicated. It is true that Rottweilers are capable of being aggressive. There's no denying the facts. These dogs have a recorded history of aggression, which we'll get into a bit later.

However, it's not as black and white as some people make it out to be. Those who are opposed to so-called "aggressive" breeds only look at the headlines and completely ignore real-world experience.

It's not hard to see why. Rottweilers are an easy target. They're a medium-sized breed with a muscular body and strong jaw. At face value, they look very intimidating.

However, like all dogs, Rottweilers are a product of their environment. If the dog is loved and treated with care, then they will become a loyal and affectionate pup.

Studies have even found that pint-sized Chihuahuas are far more aggressive than Rottweilers! Talk about judging a book by its cover!

Myth 2: Rottweilers Are All Bark and No Bite

Now, we’d be remiss if we didn’t mention the cold hard facts. There’s a reason why Rottweilers have gained the reputation they have. It’s because these dogs are fully capable of being violent. 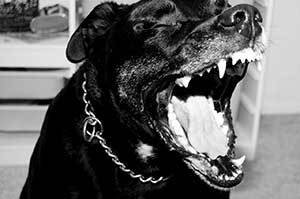 Several bad eggs have done a lot to give the breed notoriety.

Since 1982, Rottweilers have been involved in over 700 serious attacks. More than half of those attacks involved children. Over 100 of the attack victims died because of the injuries that Rottweilers caused.

Those facts are grim. There’s no denying that. Along with Pit Bulls, Rottweilers are involved in more than 70 percent of all human deaths from dog attacks. High-profile cases have made the news due to their gruesome details.

Rottweiler lovers don’t want to think about these cases, but they do exist. Rottweilers have the ability to become aggressive when provoked.

While the previous myth would make you believe otherwise, Rottweilers are perfectly fine with kids if they are raised right. Training a pup early on is key. If you set boundaries, a Rottweiler can become a wonderful family dog. 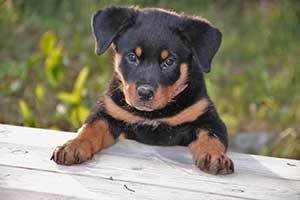 In fact, they are known to be fiercely protective of their loved ones. This includes children. Many of those high-profile dog attacks involving children were entirely preventable.

If you have a Rottweiler and small child, it’s important that you’re always keeping a watchful eye. It’s also crucial that you teach your children how to behave around dogs.

Kids don’t know how to properly interact with canines. They pull on tails, try to climb on their backs, and grab their faces. All of these acts are serious triggers for dogs. This doesn’t just apply to Rottweilers.

Dogs of any breed are capable of lashing out at children. It doesn’t matter if it's a fierce Rottweiler or a tiny Pomeranian. When you push the dog’s buttons, attacks are bound to happen.

Related: Barking Can be a form of Communication in Rottweilers

Because of their perceived danger, it’s not uncommon to hear that Rottweilers are impossible to train. In reality, that couldn’t be farther from the truth. Just look at the breed’s history!

These dogs are descendants of a long-extinct breed that lived thousands of years ago. It’s believed that they accompanied Roman soldiers and guarded cattle. After that, they were known to use their strength to pull butcher carts.

Even today, Rottweilers play an important role in many professions. They can be service dogs, work alongside law enforcement, and assist the military. These pups have been working with humans throughout history. So, they are quite trainable.

Rottweilers tend to be free thinkers. They like to do what they want when they want to. However, that doesn’t mean that you can implement training techniques. At the end of the day, Rottweilers are dogs that just want to earn praise from the ones that they love.

Myth 5: Rottweilers Will Wreak Havoc Inside a Home

Contrary to popular belief, you don’t have to leave a Rottweiler outside day and night. This might do more harm than good. You see, Rottweilers are social creatures. They need to be around others and spend time with their humans.

Locking a Rottie outside can bring the aggressive behavior out. They can become destructive and overly territorial. To be well-mannered, Rottweilers must be exposed to all kinds of people. They also need plenty of exercise to get rid of all that pent-up energy.

Myth 6: Rottweilers Will Attack Other Pets and Animals

It’s perfectly fine to have other pets around a Rottweiler. However, you do need to make sure that the pooch is introduced gently. Again, early socialization is key.

Exposing a dog to different people and animals ensures that they won’t get aggressive as an adult.

Most Rottweilers have no problem being around similar-sized dogs. They actually enjoy the company.

Just be careful will smaller dogs or other domesticated animals. If the animal is smaller than the Rottweiler, there is a chance that dog will think it’s prey rather than family.

Finally, let’s get into the biggest myth of them all. Detractors always warn would-be Rottie owners that they will one day get attacked by their pup. While those cases do exist, they are few and far between.

Need evidence of that? Think about this breed’s popularity. As of 2020, they are the eighth most popular dog breed in the United States. If they all eventually attacked their owners, they wouldn’t be so high up on that list.

For those instances when Rottweilers do attack owners, there’s always a reason. Abusive behavior and punish-based training can lead to aggression. It’s been proven time and time again. As long as you provide your dog with all the love and care they need, there shouldn't be any issue.

Well, there you have it! The biggest Rottweiler myths debunked. Rottweilers have a particularly nasty reputation. As we went over earlier, there’s a reason for that.

While they do have a tainted history, Rottweilers deserve love just like any other dog. With proper training, they can be a loyal and loving part of any family.