It's no doubt that dogs and humans have developed ways to communicate without saying a word. Sure, we may use vocal commands and hand gestures during the training process. However, physical behaviors and quirky actions can say just as much.

It won't take long for new owners to start picking up on these little physical cues and running with them. Think about the last time your dog needed to go outside or wanted to play. They probably started running to the door or pushed on your leg with their snout to get your attention.

These types of actions are pretty easy for us to understand. But what about those uncommon gestures?

One of the most adorable things a dog can do is wink their eye. No matter what breed it is, that little flick of an eyelid is enough to get any dog lover excited. As humans, we naturally search for the meaning in everything our furry friends do.

Some owners swear on the fact that their dogs are trying to tell them something or express their unique personality. While there's no harm in thinking that way, what's the real reason why dogs wink?

The main reason why dogs wink is not because they're trying to be purposefully cute, but because they don't want to fight. Dog don't utilize facial expressions in the same way that humans do. When people speak to one another, eye contact is considered to be respectful and engaging. With dogs, it's a sign of aggression.

Have you ever seen two dogs who don't like each other meet? They'll often stand very still and stare at each other in the eye. This is like a test of dominance. Both dogs are waiting for the other to break the gaze and submit. When this doesn't happen, a fight usually ensues.

Obviously, your dog doesn't want to fight you. However, that instinctive act of staring and what it means to canines is still ingrained in them.

When you're talking to your dog in a sweet and loving voice, they may make eye contact and hold it a bit. However, it usually never lasts long, right?

That's because they're submitting to you. This is where that adorable wink comes into play.

The wink is just a way to break the stare and keep the peace. In addition to winking, you may notice that your dog looks down for a brief moment before returning your gaze. Alternatively, they may shift their eyes or look at something behind you.

Another possible reason why your dog is winking at you is that they're simply mimicking your behavior. Dogs are intelligent creatures that imitate the things they see around them.

Typically, this type of behavior isn't noticeable. It starts out as small things, such as sleeping when you sleep, sitting down when you relax, and running when you run.

However, smaller physical behaviors can also be mimicked, such as winking. If you wink at your dog frequently, they may start to learn that trick all on their own. 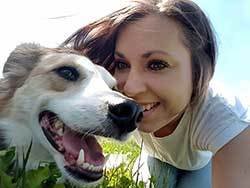 This psychological need to mimic you is actually very beneficial. For one, it makes it much easier to train your dog.

In households with multiple pets, this imitation act is even more noticeable. Young pups will follow the lead of adult dogs.

While not too many people know that dogs are capable of learning new behaviors just by observation, professionals use this trait to their advantage pretty often.

Dogs that are rescued from abusive homes typically experience psychological problems that affect behavior. To help with the healing process, these dogs are exposed to healthy adult dogs. In most cases, the traumatized dog will heal with the assistance of those canine role models.

Unfortunately, those cute winks may also be a sign of some health complications. A genetic condition called entropion is known to cause regular winking and blinking. It's most common among dogs with short noses and "squishy" faces.

Basically, the condition causes the dog's eyelids to flip towards the eye. Needless to say, it's not a comfortable phenomenon at all. Most dogs that suffer from entropion will blink rapidly to alleviate the discomfort.

If you suspect that this may why your dog is winking, it's important to talk with your vet. The only way to truly treat entropion is with surgery. Letting the condition go on for too long can lead to some serious vision problems, so it's crucial to seek professional help as soon as you notice it.

Winking is a harmless action for healthy dogs. If you enjoy seeing your pup wink at you every day, you can train them to do it more often. Dogs are all about pleasing their owners. So, you can utilize behavioral shaping techniques to encourage action.

It's a relatively simple process. Whenever your pup winks at you, give them plenty of praise and a tasty reward. You can implement a command word as well to help them establish a connection in their brain.

Words like "Wink!" or "Flirt!" are commonly used. If winking is a rare occurrence that you want to see more of, you can encourage the act by tickling the whiskers on one side of their muzzle. When they wink, give your training word and a treat.

Chances are, your dog already knows that you love it when they wink. If you give them praise and attention when they do it, that's a reward all on its own.

Even if you don't supply treats, dogs will feel a sense of accomplishment and joy when you pay attention to them. Before you know it, they'll be winking at you regularly.

While winking is not connected to any significant emotions like it is when humans do it, that doesn't mean that you have to ignore it. Continue to use your imagination and view it as one of your pup's personality quirks.

There's no harm or foul. As long as you're praising your dog and showering them with love, they'll do it just to get a reaction out of you.

Also Read: How to Teach Your Dog to Smile