Why are Huskies so Vocal?

You’ve probably stumbled across a video of a Husky that’s howling like it’s back in the icy climate with his pack. Maybe also a video of a small puppy learning his first ‘awoo’ from a human.

If you wish to understand what your Husky is trying to tell you, just keep reading!

Reasons Behind the Vocality of Huskies

Huskies are a breed that likes to share its thoughts and feelings using their voice. The noises that they make are usually howling and not much barking.

Due to their nature of living as packs, Huskies are used to having company and don’t like to be left alone for long periods of time.

Your dog’s howling can be a way of telling you that he’s uncomfortable with being alone and that he’s seeking your attention.

Although leaving your furry best friend when he’s howling and whining to get you to stay is a difficult decision to make, it’s the right one. You’ll be hurting them more if you go back to cuddle them, play with them or even completely ditch your plans to keep them company.

This will worsen their separation anxiety and they’ll become much more dependant on you, and they’ll see that their howling is effective.

That’s why you should make sure that your exit and entry aren’t too announced, give them a treat when you leave to occupy your Husky and that they have a space where they already feel safe and comfortable, like their dog crate.

Dogs can pick up and react to sounds that can’t be heard by humans because they can hear sounds at a frequency between 40 to 60,000 Hz while humans only pick up frequencies from 20 to 20,000 Hz.

This means that your Husky can react to a dog barking 80 feet away or a high-pitched sound that our ears can’t register by howling and imitating other noises like sirens.

So, don’t be alarmed if your dog suddenly starts a howl out of nowhere.

Huskies’ howling is a reflection of their big personalities. If they’re told to do something they don’t want to or put in a situation they’re not comfortable with, they won’t be afraid to announce it.

They like to have their way and if they’re upset that they don't, they can start howling and wailing and throwing tantrums similar to that of a child who was told that it’s bedtime.

How to Deal With Vocal Huskies?

If you just recently introduced a Husky to your home, their howling can be a sign of discomfort because they’re in an unfamiliar place and setting and need some getting used to, so there’s not much to do about it. 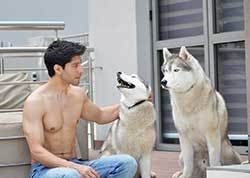 However, if you’ve had your dog for a long time and they’re still super vocal, it may be time to find some ways to train them, such as using commands like ‘speak’ and ‘quiet’ or other methods that encourage when they’re quiet.

Knowing your dog is also important in determining whether their whining is for a specific reason, which can be noticed in their body language (like wanting to pee or eat).

Huskies are really fun, loving and joyful creatures that usually only want to play and have the time of their lives with their owners.

But if you’re okay with your howling dog, your neighbors that are 10 miles away (let alone those closest to you) might not be.

So knowing what triggers a howl with your Husky and knowing how to deal with it properly can make having this four-legged ball of fluff an enjoyable experience for everyone.

Also Read: Sounds That Can Make your Dog Howl