When Do Puppies Open Their Eyes?

Raising a litter of puppies from birth can be a magical experience. It's the miracle of life right in front of you! While all newborns are relatively helpless when they come out of the womb, puppies are even more incapable of caring for themselves.

During those first few weeks of life, puppies rely on their mother for everything! Mothers provide food and protection around the clock. They even clean them and help them defecate. As an owner, you get to watch puppies develop into rambunctious bundles of fun.

Usually, that all starts when they first open their eyes!

Unlike human babies, puppies do not have the power of sight at birth. Their eyes remain closed for quite a while, which is why they are unable to do much. So, when do puppies finally open their eyes?

How Puppies Develop Their Vision

To answer your question: puppies usually open their eyes 10 to 14 days after birth.

That's a long time to live in the dark!

Interestingly enough, the ears are closed, too. A canine's ability to hear typically doesn't start to develop until 14 to 18 days. So, when they're born, the only senses puppies have are the sense of smell and the sense of touch. Everything else will develop with time.

Canines do not have the ability to see at birth because their central nervous system is still developing. In humans, this is all taken care of in the womb. Unfortunately, puppies need a bit more time to strengthen those biological functions.

Because their central nervous system isn't up to snuff just yet, exposure to bright light could be detrimental to a puppy. The nerves and the eyes aren't fully formed.

The eyes remain shut so that everything can develop in a safe environment. If the eyes were open, the growing nerves would be exposures to bacteria and dirt. This is still possible, but the chances are much lower thanks to the closed eyes.

What Happens When Puppies Open Their Eyes?

When your puppy is ready, he or she will slowly open their eyes. This isn't a sudden process. Most puppies will take their time. One eye may crack open a bit while the other remains closed. It's pretty common for puppies to open one eye first then open the second the next day.

Don't interfere with this process! It can be tempting, but prying their eyes open will only put your puppy's health at risk.

So, your puppy's eyes are open. That means they have perfect vision, right? Not exactly.

You see, a puppy's vision will continue to develop after opening. Their vision will be blurry at first. It's enough to identify other puppies and their mother. However, they will not be able to make your face out just yet.

A canine's vision will steadily improve over time. The timeline varies from breed to breed. But you can expect your pup's vision to become fully developed by about three to four weeks of age.

Related: Signs that your Dog is Losing it's Vision

Many owners make the mistake of thinking that their puppy's eye color is final once they open up. However, that's not the case.

Almost all puppies are born with bluish-gray eyes. It's a beautiful color. But it's also a color that will fade with time.

Unless your puppy's parents have bluish-gray eyes, don't expect them to stay the same. As their vision develops, the eye color will gradually darken to its true hue. This is a slow process that can take up to 16 weeks for some breeds, so be patient!

Biologically, puppies are built to stay safe as they continue to develop. However, that doesn't always mean that things are going to play out as they should. The first two weeks are a very delicate time in your pup's life.

If things don't go just right, puppies can experience a plethora of problems related to their eyes.

Eye infections are more common than most people think. While the eyes stay closed to prevent those infections from taking hold, they still happen all the time. Many puppies develop eye infections before they even see their first shine of light.

Infections come with a load of symptoms, so you can easily identify the problem and get help. You might notice swelling underneath the eyes or regular discharge. These are both signs that your pup's body is fighting off infection.

Take your young puppy to the vet. Taking fast action is paramount. Failing to treat a bacterial infection could lead to lifelong problems for the puppy. Infections can lead to severe developmental issues and blindness.

Veterinarians will usually open the eye up manually and treat the infection with antibiotics. Follow their recommended treatment plan and your pup should recover nicely.

Even without an infection, your puppy could suffer from developmental issues. In many cases, these problems fly under the radar until the dog has fully opened the eyes. Sometimes, the eyes might not open at all! 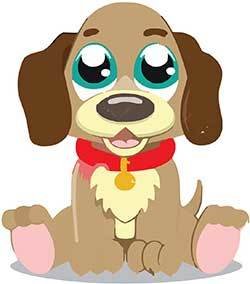 If your puppy's eyes don't open up by two weeks of age, it's important to bring them to the vet. Your vet can diagnose potential issues and formulate a plan.

Several problems could arise. Your puppy could have malformed eyes, detached retinas, or juvenile cataracts. Some puppies are born with no eyes at all.

Veterinary attention is required for all of those potential developmental problems. If you think that there's an issue, it's better to be safe than sorry.

Poor ocular development will have a major impact on your pup's well-being moving forward, so it's better to address issues early rather than later.

Keep a close eye on your pup during the first few weeks of life, no pun intended! It's a magical experience to watch puppies go from helpless newborns to fun-loving canines.

What's even more amazing it seeing your pup open his or her eyes for the first time. It's the best way to establish that bond early on, even if their vision isn't fully developed!

Also Read: Why some Dogs Sleep with Their Eyes Open