Snake bites are a very real threat to dogs. In fact, dogs are affected more by snakes than any other domesticated animal. Snakes can be found all over the world. In the United States alone, poisonous snakes live in 47 of the 50 states.

While snake bites are most common in rural areas, these potentially deadly reptiles can be found everywhere.

If your dog is bitten by a snake, time is of the essence.

Your pup can start exhibiting symptoms almost immediately. It's important to get your dog emergency help as soon as possible to limit the effects of the bite and improve their chances of survival.

What Types of Snakes Can Bite Dogs?

Any snake endemic to the area you're in can cause problems for your dog. While most people are more cautious around venomous critters, restrictive snakes can do a lot of damage as well.

Garter snakes, Boa Constrictors, Pythons, Kingsnakes, and more can bite your dog. They might not have toxic venom, but they certainly have sharp fangs. Oftentimes, these snakes will wrap around your dog and try to suffocate them.

This is most common with smaller breeds. Either way, a bite can cause serious wounds and inflammation.

Venomous snakes do the most damage. There are more than 20 different species in the United States alone. The damage their toxins can do vary across the board. Furthermore, the size and health of your pup can affect their prognosis after a bite.

Regardless, here are the snakes that have been known to have the most run-ins with dogs.

A type of pit viper, rattlesnakes are usually found in southeastern states. They are reddish-brown in color and can sometimes blend in with dirt and brush. Most have distinct patterns on their back and the iconic rattle to ward off potential predators.

A bit from a rattlesnake is particularly dangerous. It can cause hemorrhaging very quickly, wreaking havoc on your dog's body.

Don't let the small size of coral snakes fool you. They can do a lot of damage to a dog. These snakes are identified by their stripes of red, yellow, white, and black.

Usually found in Texas, Arkansas, and Louisianna, Coral snakes have some of the most potent venom around.

Named after their distinct copper-colored heads, these snakes can get as long as 6 feet. They're usually found hiding in leaves and bush. They can be identified by the hourglass pattern on their bodies.

The snakes are native to many states. Though, they're most common along the Eastern Seaboard.

Cottonmouths get their name from the white color of the inside of their mouths. It offers a stark contrast to the dark brown and black color on their bodies. Typically, Cottonmouths can be found around swamps, rivers, and ponds. As such, they're sometimes referred to as water mocassins.

A bite from a cottonmouth is quite lethal. Not just for dogs, but also humans.

What Are the Symptoms of a Snake Bite?

Due to their penchant for exploration and protection, snake bites on dogs are more common than you'd think. Whether your dog encountered a snake on your daily walk or while they were out exploring on their own, it's important to know how to identify the symptoms of an injury.

Being able to spot those symptoms can mean the difference between life and death for your canine companion.

Bites from a non-venomous snake are the most benign, but that doesn't mean that you should ignore them. Typically, bites occur on the face and head. Unfortunately, this is where a dog's fur is its thinnest. As such, they don't have as much protection from puncture wounds as other areas on their body.

The first thing you might see is bleeding. This could be accompanied by swelling or bruising around the bite site. Take a look around the area and you may be able to see two horseshoe-shaped shaped bite marks.

If the bite didn't happen recently, your dog could already be experiencing infection around the area. This can cause discoloration and some discharge.

Be gentle when handling your dog. While the bite wasn't venomous, the wound is still quite painful for your pup.

There are many variables that could affect the severity of a venomous snake bite. As we mentioned earlier, the species of the snake and the size, weight, and health of your dog come into play. However, so does the amount of venom administered.

Some kinds of venom will attack the central nervous system directly. This can cause your dog to start exhibiting some strange behavior. 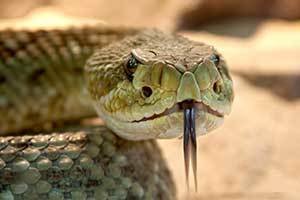 They may lose balance and appear to be drunk in their troubled mental state. In serious cases, the bite can also lead to shallow breathing, shaking, and seizures.

If your dog had a particularly bad run-in with the snake, they could have been bitten multiple times. This is pretty common with certain snake species.

Unfortunately, this results in a massive amount of venom being administered in your dog's system.

Typically, dogs who have been bitten multiple times will collapse and experience paralysis.

Bites from a pit viper, such as rattlesnakes, copperheads, and cottonmouths, can lead to immediate physical reactions around the wound. These snakes have venom that's capable of digesting flesh within minutes.

This causes the skin to become discolored. It may turn ugly shaped of purple or black. Plus, it will be incredibly sensitive. This venom can cause irreversible damage, so emergy care is paramount.

In addition to the major symptoms, bites from a venomous snake can be accompanied by less-serious signs. You might notice some bruising or swelling around the wound. Dogs can also start vomiting, experience diarrhea, and more.

How Are Snake Bites Treated?

There are several ways to treat snake bites. No matter how serious the bite is, it's always recommended that you visit a vet. However, there are a few things you can do en route.

What You Should Do Immediately

The moment you realize your dog has been bitten by a snake, you need to gather as much information as possible. Safely take a picture of the snake if possible. Then, make your way to the emergency vet clinic.

Take off your dog's collar or harness. Swelling in their windpipe can make it difficult to breathe, so you want to remove as many restrictions as possible. Then, put your dog in a kennel and keep them calm.

* Try not to panic and excite your dog. Any movement will cause any venom to travel through their body faster.

If you can see the bite wound, clean it with water or a baby wipe. This will remove the venom from the skin and decrease the chances of infection. Then, apply an ice pack and pump up the AC. Cool temperatures can slow down circulation, which slows down the spread of venom.

Related article:  What To Do Immediately After Your Pet Is Bitten By a Rattlesnake

Your vet will assess the situation and determine the best course of action for your dog. They may provide oxygen support and intravenous fluids. Dog snake bite Benadryl is commonly administered to reduce inflammation.

All of the information you collected about the snake will be used to find the appropriate treatment option. If your dog was attacked by a venomous snake, your vet will administer antivenin. This is a specialized treatment that's designed to combat the effects of the venom.

The prognosis of a snake bite depends on how quickly you act. You should treat every bite as a serious injury and provide your pup with the emergency care they need. As a pet owner, you can do your part to minimize the chances of a bite as much as possible.

While you can't prevent them completely, some simple changes to your yard can make all the difference.

Keep your property clean of debris and fill any holes or hiding spots. Check your yard regularly and invest in snake wildlife control services to minimize the chances of snakes calling your property home.