Redford Naturals is a lesser-known dog food brand that's only available from Pet Supplies Plus. It's the retailer's in-house private label dog food brand. While not as popular as some of its more widely available contemporaries, this brand has a lot to offer.

Competing with the industry juggernauts, Redford Naturals provides enticing formulas to dog owners who want the very best for their canine companions.

A quick glance at the labeling shows some impressive ingredients and a great nutrient profile. But is Redford Naturals dry dog food worth the buy? In this review, we aim to find out!

Redford Naturals is not a brand you'll see sitting on the shelves at your local big box stores. It's exclusively sold by Pet Supplies Plus, a retail store with more than 550 stores across the nation.

Pet Supplies Plus has been around since 1988. The first store opened in Redford, Michigan, which undoubtedly inspired the dog food brand name!

Redford Naturals acts as the store's in-house brand. It became available in 2016 and has continued to grow ever since!

As of 2021, Redford Naturals offers both cat and dog food products. The dog food product range includes three separate lines that cater to distinct dietary needs. Within those lines are multiple formulas, allowing you to find a recipe that works for your pooch.

The Natural Recipes line was one of the first. These products put Redford Naturals on the map! Consisting of four formulas, this lineup is all about providing the core essentials.

Each recipe is free of unnecessary fillers like corn, wheat, and soy. Instead, they contain wholesome ingredients that support your dog's body and health.

The Grain Free Recipes prioritize protein. They contain higher protein percentages than the Natural Recipes line. Not only that, but they're free of grains for easier digestion. The dry dog food caters to sensitive eaters without sacrificing muscle-building protein.

The newest Redford Naturals line is the LID Recipes. LID stands for "Limited Ingredients Diet." As you can guess, these formulas are best for dogs that suffer from allergies.

The recipes have a single animal protein and none of the unnecessary extras. The food offers a simplified diet to free dogs of allergic reactions and digestive upsets.

Compared to other dog food products on the market, Redford Naturals appears to be above-average in terms of nutrient analysis. The exact parameters vary from formula to formula. But as a whole, Redford Naturals excels on many fronts.

One of the most important macronutrients for dogs is protein. Redford Natural's numerous products contain high levels of protein.

The average across the product line is around 24 percent, which is higher than the AAFCO minimum of 18 percent for adult dogs.

That said, some products have a considerably higher protein analysis. For example, items in the Grain Free Recipes line have as much as 30 percent protein.

The same goes for fat and carbohydrate content. The average for fat is roughly 14 percent.

When it comes to the quality of ingredients, Redfords Naturals doesn't disappoint.

For protein, this brand utilizes many sources of animal meat. The most common is chicken and chicken meal. Its located at the top of the ingredients list for many of the standard recipes.

What you won't find are meat byproducts. None of the products contain proteins from questionable sources. 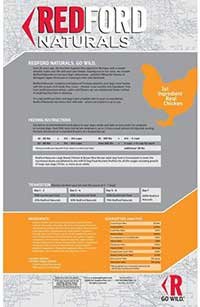 Many of the recipes include complex ingredients like brown rice, flaxseed, and oatmeal, for carbohydrates. The grains are often used in the Naturals Recipes lineup.

They are complex carbohydrates with a low glycemic index, ensuring that your dog experiences continual energy throughout the day.

Tomato pomace is used in many of the formulas. Its purpose is to serve as a soluble fiber. The ingredient helps with digestion to keep dogs regular.

Brewers yeast is a dietary supplement that contains a host of vitamins and minerals. Some studies say that it also works to repel fleas naturally. Redford Naturals utilizes it in many of the dry dog food products.

Finally, there's salmon oil. A healthy source of fat, salmon oil is an excellent source of omega fatty acids. It can support the skin, boost the cardiovascular system, and help the immune system fight free radicals.

According to information from customer service, Redford Naturals products are manufactured in Kansas. Most of the ingredients are sourced within the United States.

The only exceptions are the lamb and salmon ingredients. Those reportedly come from Australia, Canada, and New Zealand.

Redford Naturals products are thought to be manufactured by CJ Foods. The manufacturer has processing plants in Kansas. CJ Foods is a trusted dog food maker that provides products for big-name brands like Blue Buffalo and Nature's Variety Instincts.

Redford Naturals is still a young brand by comparison. In the years since its launch, the brand has never had any products recalled.

Despite its short time in the industry, it seems like Redford Naturals and Pet Supplies Plus take quality and safety seriously.

All in all, Redford Naturals seems to be a brand worth looking into. The products are available in Pet Supplies Plus stores and the official website. The various dry dog food products are above average compared to some of the competitors.

It's not going to outdo ultra premium brands. However, the products are perfectly capable of supporting your dog's health in the long run.

Also Read: Too Many Dog Treats can Cause Diarrhea