Much like humans, dogs experience a wide range of emotions. While most people think of dogs as fun-loving and free-spirited creatures who only want to play, dogs are much more complex than that.

Trauma, neglect, and poor socialization can turn otherwise friendly canines into fearful animals who want nothing to do with humans.

Shy dogs require a bit more finesse than pups who have spent their lives in loving social environments.

If you're adopting a dog from a shelter, there's no way to know for sure what that dog has experienced. For all you know, they could have been abused by a previous owner or abandoned to die. Those experiences create significant trust issues and fear.

Whether you're trying to form a bond with a stranger's dog or you're looking to make a rescued pup a member of your family, building that trust takes time. The last thing you want to do is approach a dog that's scared of you.

Not only could you cause more anxiety in the animal, but you're putting yourself at risk for a bite. To get a scared dog to trust you, it's important to take a gentler approach.

How to Tell If Your Dog is Scared Of You

Before you even approach the dog or make any attempts to gain some trust, you need to be able to understand the signs of fear. Dogs aren't able to flat out tell you that they don't want you to come near. But, you can get a lot of information by simply studying their body language.

Dogs can be very emotive. Some signs are incredibly obvious. These include whimpering, cowering, backing off, or growling. Even in instances where the dog looks like they are about to attack you, they could be very scared of your presence.

Fear unlocks that "fight or flight" response in animals. You may have inadvertently scared the dog, causing them to think that they need to defend themselves from harm.

While those signs are all very obvious, canines also do a lot of subtle body ticks that are a bit more difficult to spot. Just because a dog is sitting still and motionless when you come by doesn't mean that they are at ease. Take a look at your pup's body. 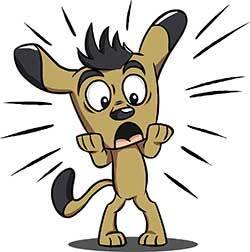 Are the ears pinned back? Do the dog's eyes appear to be wide and alert? Are they making eye contact? These small details indicate that the dog is not comfortable.

The ears are often one of the biggest telltale signs of fear. The same goes for "whale eyeing," which is when a dog looks at you while facing in another direction.

They tend to be motionless. However, they'll follow your movements with their eyes, exposing the whites. This is an effort to gauge the situation.

Other body language signs that you should be aware of include calming motions. These small actions are the dog's way of coping with their fear on their own. The exact actions vary from dog to dog. However, most will lick their lips, grimace, yawn, and sniff the area repeatedly.

Knowing when a dog is scared of you is only half the battle. Where do you go from there? Building bonds with a rescue dog is not always easy. It takes time and every dog's journey to building trust is different.

However, there are a few key techniques that trainers use to distill fear and get pups to feel more comfortable.

First things first, give the dog plenty of space. Your mere presence can do a lot to increase anxiety levels. While being in their line of sight can also cause a fearful dog to grow anxious, having ample space between you can do a lot to start the process off on the right foot.

It's recommended that you create at least 10 feet of space between you and the dog. Make sure that you consider any confinements they're around. For example, if they're on a leash or stuck inside a crate, 10 feet might not be enough.

Don't make the mistake of thinking that that you can approach a dog because they have no way to get out. The fact that they're stuck is not lost on the dog. Thus, walking up to their kennel and trying to build trust will not do much.

If you brought a new rescue dog home, make sure that they have plenty of time to acclimate on their own terms. Before their arrival, set up a kennel and outfit it with comfortable blankets. Close any doors of rooms that you don't want the dog to enter. When they finally arrive at their new home, ignore them.

This may seem cruel at first, but it's the best thing you can do. Your new pooch is in a strange environment they've never seen with a human they don't trust. Let them explore the home on their own.

There's a good chance that they'll spend a lot of time in the kennel at first. That's completely normal. The kennel should be their safe space, so it's a good sign.

Don't force any interactions. If they walk by you, pay them no attention. This small gesture shows the dog that you're not out to get them.

Next, you should avoid making direct eye contact. Eye contact plays a big role in canine communications. If you have another dog that trusts you, try doing a short experiment. 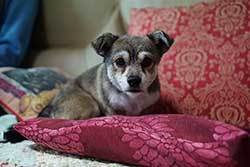 Stare directly into their eyes and see how long they can take it. Chances are, they will blink or avert their eyes after only a few seconds. That's because canines in the wild will lock eyes before they start a fight.

Dogs who love and trust you don't want that, so they'll often break eye contact every few seconds to let you know that there's nothing but love between you two.

For a fearful dog, eye contact only serves as a form of intimidation. They may think that you're about to fight them, which makes them feel more anxious than before.

* When you have to look at the dog, try to do look to the side instead of directly at them.

Controlling Your Own Behavior

Any animal shelter worker will tell you that directly approaching a scared dog from the front is not a good idea. Humans are considerably bigger than dogs. Thus, you're automatically intimidating to them.

When you want to approach a dog, you need to control your own behavior and make yourself as non-threatening as possible. How do you do this? Well, you can crouch down and get on their level. By doing so, you're shrinking your massive size down significantly.

Next, you should approach them from the side. Alternatively, you can keep your back to the dog at all times. Both methods can be quite effective. If you do approach the dog from the side, get next to them and face the same direction they are.

This is a great way to access their personal space without making them feel threatened. Because you're not approaching them head-on, the dog will feel that they are still in control of the situation. Of course, you should continue to avoid eye contact until the dog approaches you first.

Ideally, you shouldn't approach the dog at all. Instead, you should allow the dog to approach you first. Again, it's all about being un-threatening and letting the pup know that they are in control of the situation. You can get down to the dog's level and get closer to them from the side. Then, just wait. 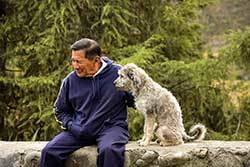 If the dog is interested in investigating you, they may approach you very slowly.

Don't make any sudden movements that could potentially scare the dog into submission. Instead, just ignore them.

Place your hand out and put it on the ground. If the dog sniffs your hand, they are interested in you. You can then try to pet them.

Start by touching the front of their chest first. Touching the chest is better than petting the head directly. Many dogs cower at the sight of a human lifting their arm.

Pay close attention to the dog's behavior as you touch their chest. If they turn their head or wince, stop petting and give the dog some time. If they lick your hand or continue to sniff you, you're well on your way to building trust.

Positive reinforcement can make a drastic difference in how a dog sees you. There's no better motivator than delicious food, so why not use it to your advantage?

Any time that your dog pushes themselves out of their comfort zone, you should provide them with a treat. Simply toss the treat behind them. They may not be comfortable enough taking it from your hand just yet.

You can continue to use positive reinforcement throughout your relationship-building exercises. Even after your dog has learned to trust you, treats are an effective way to reward them for socialization and affection.

You should never hit, verbally abuse, or punish a scared dog. It's important to remember that rescues often have years to negative emotions in their past. The goal is to show the dog that they can trust you. Creating negative feelings or physically harming the dog will only cement those fears.

Positive reinforcement has been proven to be a much better alternative. Instead of punishing bad behavior, you're rewarding good actions.

Rescuing a dog can be one of the most rewarding experiences dog owners will ever go through. There's nothing better than watching a fearful dog flourish into a loving member of the family.

While it does take time, you can build trust with a shy dog. Just be patient, give them space, and don't force anything. Eventually, the dog will have no problems showering you with affection.

Also Read: How to Dominate a Dog and Become the Alpha Leader