How Long do Puppies Sleep a Day? (patterns, habits & places)

It's a known fact that dogs sleep more than humans do. While a number of factors go into a particular dog's napping needs, they generally require much more downtime than their owners.

With puppies, the number of hours they spend sleeping may surprise you. Like newborn babies, they need sleep to develop properly. Puppies won't sleep continuously throughout the night and spend most of the day dozing off.

New puppies need a bit of guidance to ensure that they develop healthy sleeping habits into adulthood. It's the job of the owner to provide the pup with the right tools they need to learn how to sleep throughout the night. Not only will it benefit the puppy, but the owner as well.

How Much Sleep Do Puppies Need?

Dogs go through different phases of sleep requirements. From birth up to 3 months of age, puppies will usually spend up to 22 hours sleeping. The only time they will be awake is to eat. The rest of the time will be spent in a deep slumber.

After that first 3 months, the puppy will begin developing essential skills, like eating solid foods and walking. In this time, they will have more energy to walk around and explore but still sleep for most of the day.

Throughout the first year, puppies will begin to develop rapidly. You'll notice extreme changes in their energy levels. However, they will still require a ton of sleep. The exact amount depends on a number of factors, including activity level and breed.

However, most will spend anywhere between 16 to 20 hours a day sleeping. This time is spread throughout the day with small naps, often occurring after bouts of frenetic energy.

Puppies spread their required napping hours throughout the day. While a large chunk of sleeping time occurs at night, most of it is spent with smaller naps. Puppies may spend a few hours here and there dozing off during the day. 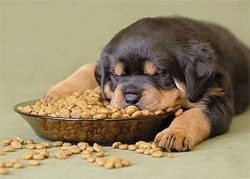 Generally, they take a nap every hour or so. This is followed by a burst of playful energy. Once their energy is gone, they'll calm down and be inactive until they fall asleep and repeat the cycle.

In many cases, puppies can't control when they'll fall asleep. They may appear drowsy before snoozing at the most random places, such as at their feeding dish.

Particular sleeping patterns differ slightly from breed to breed. Smaller dogs like Pomeranians and Chihuahuas tend to have more energy at any given time compared to larger breeds.

These small dogs will sleep for shorter amounts of time and have much more energy in between naps. Large dog breeds like Saint Bernards often sleep for much longer and much deeper.

Certain low-activity breeds also sleep more than average. These dogs, lovingly nicknamed "couch potato dogs," don't have the energy levels to run around all day. Instead, they spend most of their time lounging around and napping.

These breeds include bulldogs, mastiffs, and hounds. Their sleep requirements as puppies lie on the upper end of the spectrum, closer to 20 hours a day.

How Do Puppies Sleep?

Puppies sleep very similarly to humans. They have the same three stages of sleep. When a puppy first falls asleep, they are in the first phase. This is evident by occasional jerks and movements.

After that, they will sleep very calmly. Then they will alternate between a deep sleep and the rapid eye movement, or REM phase. Puppies spend more time in this particular phase than adult dogs. 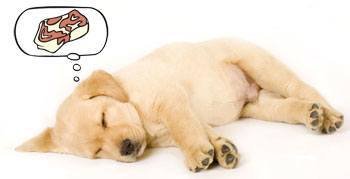 Like humans, dogs can dream. Dreaming occurs during the REM phase. It's not uncommon for dogs to make noises and move as they dream. Dogs can kick, simulating a running movement, or make faint barks. While alarming, it's perfectly normal.

Owners shouldn't wake them, as it can be difficult to make puppies fall back asleep after regaining some energy.

Creating a regular sleeping pattern is important for puppies, as this will continue into adulthood. Owners need to promote and encourage sleep time. Puppies won't sleep throughout the night. They'll usually sleep between 6 and 10 hours during the night.

When they wake up, they may need to be taken out to use the bathroom. However, it's important that owners don't comfort or fawn over the puppy if they whine throughout the night.

This will only appear to be positive reinforcement, producing undesirable behavior in the future.

Best Places For A Dog to Sleep

One of the most important parts of establishing a sleeping routine is to designate a place for them to sleep every night. The best place for puppies is a crate or kennel. It should be lined with puppy pads or newspapers to soak up any accidents. A comfortable pillow will create an inviting spot while keeping them from sleeping in their own mess. 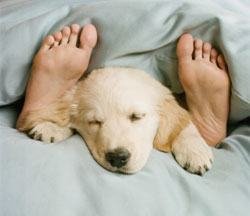 While many owners like their dogs to sleep with them in bed, it's not a good idea to allow this as a puppy. Not only are puppies unpredictable, but it will create bad habits.

Puppies should be comfortable with their own sleeping spot before being allowed to enter a bedroom.

This will demonstrate that the puppy should wait for you to get up from bed before going to you.

Puppies should be trained to go to their spot on their own. While it may be tempting to pick the pup up and plop them in their crate, it will create a negative experience for them.

They'll associate the sleeping spot with a bad feeling, making it even more difficult for them to get comfortable. Owners should lead the pup with treats and give positive affirmations when they enter their sleeping spot on their own free will.

Because puppies sleep the majority of the time, it can be difficult for owners to get them to sleep at night. It's not uncommon for dogs to become active at the most inopportune times, resulting in lasting issues.

To promote a regular sleeping schedule, it's important to tire them out prior to bedtime. This doesn't mean keeping them awake throughout the day, but rather allowing them to expend as much energy as possible before going to sleep.

Simple tasks like going out for a walk before bedtime can get the job done. It's also important to feed them prior to sleeping. If owners fail to feed them, their hunger will keep them awake. They'll then whine during the night and become restless.

Owners should make sure to feed them, let them use the bathroom, and expend energy before bedtime. If successful, the puppy will be too tired to avoid sleep and doze off immediately.

As puppies grow up, they will sleep less and less. They'll also mimic their owner's sleeping patterns, allowing them to get a full night's rest with supplementary naps throughout the day.

Helping a puppy learn to sleep normally with an established routine and location is crucial to proper development. A well-rested puppy will lead to a happy and healthy adult dog in the future.

Also Read: The Reason Why Dogs Like to Lay at Your Feet