Does Your Dog Have Ear Mites or is it a Yeast Infection?

When most people think of infections and infestations in dogs, they picture skin issues around the entire body. However, ear problems are far more common than you think! .

Your dog's ears are the perfect environment for infections and parasitic infestations. They're moist, dark, and damp. If your dog has long and floppy ears, their risks are even greater! Floppy ears do not receive proper ventilation and airflow, creating a breeding ground for problems.

Two of the most common issues you might encounter with your dog are ear mites and yeast infections.

Both of these conditions should be taken seriously. Not only are they uncomfortable for your dog, but they could lead to hearing loss if you leave the issue untreated.

Ear mites and yeast infections look similar. Owners often confuse the two. However, these are two entirely different conditions with their own unique treatment methods.

To truly take care of the problem, you're going to need to know how to differentiate the two.

What Are Ear Mites?

Ear mites are pesky little parasites. Nearly impossible to see with the naked eye, these pests are barely as big as a pint point. If you were to look at them under a microscope, most ear mites are tiny organisms with eight legs that they can use to navigate your dog's ear canal.

The most common type of mite to affect dogs is called Otodectes cynotis. Interestingly enough, this mite is considered to be a type of mange. 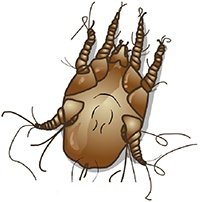 They're not just limited to the ears, which is why these mites can be such a bigger problem than most people think.

While ear mites may originate in the ears, they can quickly spread to other parts of the body. There, they can burrow into the skin, damage the hair follicle, and cause extreme hair loss! In the ear canal, these mites cause inflammation and infection.

How Do Dogs Get Ear Mites?

More often than not, dogs get ear mites from other animals. These pests are highly contagious. They easily migrate from animal to animal.

Before you freak out, ear mites usually do not spread to humans under normal circumstances. It's possible, but it's also very rare.

Dogs can be exposed to ear mites from many different animals. They can get it from other dogs during a heavy play session, rabbits that they chase, or even mice. However, the most common source is cats!

Cats are the perfect host for ear mites. They will infiltrate the canal and have eggs. The lifespan of a mite is pretty short, lasting only three weeks. But during that time, the mites will reproduce so often that the population grows dramatically.

The most obvious sign that your dog has ear mites is strange behavior. An infestation is not a comfortable feeling. Thus, dogs will shake their head vigorously as if they are trying to get water out. 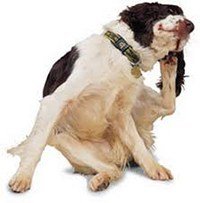 They may also paw at their ears. In serious cases, your dog might have inner ear problems that lead to difficulties staying balanced.

Physically, you might see some symptoms, too. Ear mites cause redness, swelling, and a buildup of reddish wax. These are all similar symptoms to yeast infections. But there is one telltale difference.

Ear mites often leave behind a dark grainy discharge. It has a similar color and texture to coffee grounds.

How Do You Treat Ear Mite Infestations?

Treating ear mite infestations requires improving the environment inside the ear. But before you can do that, you'll need to eliminate the existing mites.

To do that, use an ear flush. These are readily available at most pet stores. You can also consult your vet. They may prescribe a thicker flush that's specifically designed to kill mites. If not, a standard antiseptic flush will do.

Fill your dog's ear with the liquid and massage the base of their ear. Make sure you have a good hold of your dog's head.

They will try to remove the liquid as soon as you put it in!

After massaging for about 30 seconds, let your dog do a shake. We recommend doing this outside. It's a messy process!

Once that's done, use cotton balls to wipe away any gunk. Repeat the process until there is no more discharge to remove. Your vet may also provide an anti-parasitic lotion to apply to the skin that will prevent mites from taking hold while your dog recovers.

After you have taken care of the current infestation, do a deep clean of your home. This is the reason you need to know the difference between ear mites and yeast infections.

Remember, ear mites are highly contagious! Failing to clean your dog's bedding and vacuum around your home could quickly lead to another infestation. It's also good to treat any other pets in the home for good measure.

What is a Yeast Infection?

Yeast infections are fairly common in dogs. They are caused by a specific fungus called Malassezia pachydermatis. Dogs with demodectic mange are more susceptible to yeast infections in the ears because it's caused by the same fungus that leads to mange-based skin infections.

How Do Yeast Infections Start?

There are a few different reasons why yeast infections start. However, they all are a direct result of bacteria and fungus getting where it shouldn't! As we mentioned earlier, the ears are the perfect environment for problems to occur.

The moist and warm nature of the ear makes it prime breeding grounds for bacteria and fungus to multiply. When these yeast infections take over, they start a snowball effect.

The yeast can lead to bacterial infections, allergic flareups, and more.

The symptoms for yeast infections is similar to that of ear mites. Your dog will show some behavioral quirks, such as pawing at the ears or vigorous head shaking. The ears will become red and inflamed as well.

While they might look similar at face value, yeast infections become easier to diagnose the closer you look. This condition results in a gooey discharge.

It might come from deep within the ear canal. However, there's a good chance that you'll see it on the folds of the ear, too.

This discharge can be yellowish in color. It may also be dark reddish-brown if your dog has a considerable amount of wax buildup in the ears. Either way, the discharge will have a very pungent odor.

Yeast infections are notorious for producing an unbearable smell, so you will likely notice it immediately.

Treating a Yeast Infection in Your Dog's Ears

Treating a yeast infection will require flushing out the ear. However, most vets recommend bathing your dog first. Because yeast infections are caused by the same fungus that causes demodectic mange, you have to be extra precautions.

Use a medicated anti-fungal shampoo and bath your dog thoroughly. Pay close attention to ear flaps. As you're cleaning remove as much discharge as you can.

After rinsing, dry out the ear gently with a towel. Then, use a boracetic ear flush. These ear flushes have acids that neutralize bacteria, fungi, and yeast. Plus, it'll dry out the ear completely.

We recommend using ear flushes every time your dog has exposure to water. It'll take care of potential yeast infections before they have a chance to flourish.

Ear mites and yeast infections are never fun to deal with! However, you must address these problems as quickly as possible. Your pup will hate the treatment process. But, it's necessary!

After you have dealt with the issue, consider taking steps to avoid future problems. Pay attention to your dog's ears when you groom them. Use flushes regularly and do your best to keep the ear as dry as possible.

With a few extra precautions, you'll never have to deal with another ear mite infestation or yeast infection again!