Whether you bought your dog from a breeder or adopted them from a shelter, there's a good chance that it spent only a limited time with its biological family. Most dogs these days don't have a robust familial structure.

It's not like it was in the past when canines relied on a pack to survive. Nowadays, liters are broken up after only a couple of months of development. The puppies move to new families, and mothers move on.

In many cases, mothers have more liters to spread even more puppy love.

While that limited interaction might seem sad in the scope of human relationships, dogs don't seem to mind that separation that much.

They form brand-new packs with their owners and human family members!

Despite their seemingly elastic emotions, many owners wonder if they're capable of remembering mothers and siblings.

Canines are emotionally responsive and have a knack for identifying human faces. So, does that mean they have lingering memories of their biological family?

Before we get into the science of things, how exactly do canines form lasting bonds? In the past, pack hierarchy was everything!

Dogs lived in roaming packs and relied on one another to stay safe. They did everything together, from hunting as a collective to sleeping close to one another.

Even to this day, wild canines show signs of a concrete bond between the dogs in the pack. Younger pups learn from the elders before doing everything they can to provide protection and safety.

But what about a domesticated dog?

It turns out that dogs create memories in many different ways. However, it's not in the same way that humans form bonds.

You see, puppies are born blind and deaf. Not only that, but they have limited mobility.

While dogs eventually form those senses and learn to navigate the world, they rely on their mothers for survival during the first several weeks of life.

Contrary to popular belief, mothers are more than just milk machines! They groom their offspring, protect them from danger, and even teach them how to function.

It's pretty similar to what you see in a pack setting, providing some insight into what puppies genuinely think of their mothers.

From birth to about four weeks of age, the mother acts as the sole means of survival for newborns.

Humans can take the place of the maternal figure to some extent and help orphaned dogs grow up to be healthy dogs. However, there are several things that even the most well-meaning human cannot do.

The most obvious thing is nursing.

Sure, humans can feed young pups with a bottle, but it lacks the physical connection. Young puppies are directly against their mother's body, taking in her scent and heat.

Not only that, but female dogs produce unique pheromones that induce calm and a sense of safety.

It's one of the many reasons why puppies automatically flock to their mother in times of stress or potential danger. She simply makes them feel at ease.

Related: What Happens when Brother and Sister Dogs Have Puppies

Mothers also provide warmth and help stimulate bodily functions. They lick the anogenital area to promote defecation and urination, which young pups cannot do on their own.

These acts of maternal care add up, creating a strong bond that many dogs will remember. 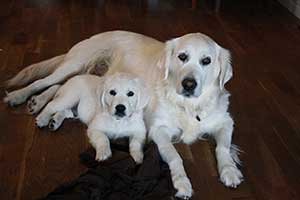 Because they're sharing that experience with littermates, many will have short-term memories of their siblings as well.

It's akin to those fond memories you have of childhood fun with your own siblings and parents.

Those first few weeks of life for a puppy are formative, and what they experience will shape them into the dog they become.

For this reason alone, the bond they share with their biological family matters. Even if the time they spend together is fleeting, it's vital to their overall development.

Do Dogs Remember Their Mother?

We know that young puppies learn to recognize and identify their mothers pretty quickly. That's evident with a simple observation. But how long do those memories last?

It turns out that dogs can remember their mothers for a surprisingly long time after separation. It's not just hearsay, either.

Studies with empirical evidence show that adult dogs can remember mothers for at least two years.

During the first experiment, he sought to see how well younger puppies between four and five and a half weeks of age remembered their mothers after only 30 minutes.

He started by placing the separated puppy in a middle of a room. On one end was its mother. On the other was a random female of the same age and breed.

About 84 percent of the puppies went to their biological mother.

Dr. Hepper repeated the test. But this time, he utilized scent rather than sight.

The scientist had the mothers sleep with towels for two nights to infuse them with natural smells and pheromones. Then, he placed it in a room along with the towel of another random female.

Once again, a majority of the pups gravitated towards the mother's towels. Around 82 percent spent more time with the towel with their mother's scent than the random one.

Those studies showed that puppies formed a quick and lasting bond with their mothers. But what about long-term memory?

Dr. Hepper repeated the experiments with a small group of mothers, including dogs from different breeds.

He specifically chose mother and child pairings separated when the puppy was between eight to 12 weeks old. Once the puppy hit the age of two years, he performed the same experiments.

Interestingly enough, over 75 percent of the dogs recognized their mother's scent. The study showed that dogs carry those memories of their mothers well into adulthood.

Upping the ante even further, Dr. Hepper conducted another experiment with different dog breeds. This time, he included dogs that hadn't seen their mothers for over five years.

Seven out of the eight dogs tested identified the towel that had their mother's scent.

The final experiment was on a much smaller scale, so we can't use the findings to make too many definitive statements. But the earlier studies are more than reliable enough to conclude that dogs can remember their mothers for at least two years after separation.

Dr. Hepper's findings are pretty fascinating and give us some amazing insight into how dogs think. It shows that dogs can similarly form lasting bonds to humans and other emotionally driven animals.

So, what about mothers? Can they remember their children?

Mothers often give birth to multiple liters, which some could assume would muddy the waters a bit. Dr. Hepper performed the same scent-based test to find answers.

Like before, mothers were given a choice between towels scented with her liter and those infused with a random group of puppies.

They almost always chose the towels of their offspring. They can identify their children even after two years of separation and giving birth to other puppies in the intervening period.

The bond puppies have with siblings is also strong, as they share many of the same formative experiences. However, their memories aren't as long-lasting.

Dr. Hepper experimented with young puppies around the same time as his previous studies.

During these tests, he placed puppies in an enclosure with puppies of the same age, breed, and gender. The group had a mix of siblings and non-siblings.

About 67 percent of the time, the puppies showed signs of recognition with littermates.

Unfortunately, the same can't be said after two years of separation. Dogs don't recognize siblings in the same way as mothers.

It all comes down to how much time they spend together. The bond gets more robust if the siblings continue to live together into adulthood.

Canines that move to shelters often stick together for protection and comfort. It may continue if they are adopted into the same home.

Either way, long-term separation tends to diminish the memories brothers and sisters have of one another. The bond dissolves, and dogs forget their litermates once they grow up.

Thanks to the work of Dr. Hepper and his associates at Queen's University Belfast, we no longer have to wonder about whether or not dogs remember their biological family members.

It's pretty clear that dogs have a pretty solid bond with their mothers and can remember them for at least a couple of years after separation.

Now, the matter of remembering and missing family members is an entirely different thing. If the human experience has anything to show, dogs do just fine without those biological ties.

They're perfectly content finding new family members to love and cherish. As long as you return the favor, your pup will have all the family they need with you by their side.

Also Read: Why Your Dog Wants to Sleep and Cuddle With You but NOT Your Husband