Do Dogs Like Kisses? Do they Understand & Feel the Affection?

To us humans, a small kiss on the cheek or head is just a simple sign of affection. It's instantly recognizable and is often used instinctively amongst members of the same family.

As a result, it's not uncommon to see dog owners shower their beloved canine companion with kisses. It's a way for us to express our love and admiration for our furry friends.

You may even receive some licks and head nudges in return. But..

does that mean that they understand kisses or like to receive them?

Dogs are complex creatures with unique ways of communicating. Canines have evolved significantly since their days in the wild. While we utilize words to tell each other how we feel, dogs don't really have that luxury.

Sure, they can bark and whine all they want, but that doesn't mean that they're talking, even when the barks are directed at another dog.

To make things even more complicated, the so-called "language" that dogs used to communicate eons ago has been lost through domestication. So, dogs have a hard time communicating with other animals of the same species, let alone with us humans.

Dogs rely heavily on unspoken body language. Certain actions and movements are universally understood across the species, regardless of breed or training.

This is important to understand when you're trying to communicate with your dog, as you may inadvertently be sending the wrong message. Next time your pup is around other dogs, pay close attention to how they act around one another.

While some movements seem arbitrary, they may actually hold a much deeper meaning.

Have you ever wondered why dogs tend to circle around each other before they meet face to face? It's because they are approaching cautiously. They may be also taking a good whiff of the other dog to pick up their scent and gauge the risks of approaching.

Most dogs will approach each other from the side. It's their way of saying, "Hello," without the risks of surprising the other canine. They may then lick the other dog or rub heads.

More aggressive dogs will not do this side-approach behavior. They'll often approach from behind and take on a more menacing posture. This is to make themselves appear bigger and assert their dominance.

Whether you're dealing with a submissive dog or an Alpha, you'll very rarely see a head-on approach.

How Dogs Show Affection to One Another

Licking is often viewed as a sign of affection between canines. While the act does produce some feel-good vibes between two dogs, it's not necessarily meant to convey feelings of love like you would imagine.

Dogs are exposed to canine licking from the minute they are born. Mothers typically lick their offspring clean right after they come out of the womb. This immediate exposure teaches the young pup how important the act of licking is to canine communication right from the jump.

From a biological standpoint, licking is something that dogs need to do to survive. They do much of their exploring through their sense of taste. Their tongues are used to help them gather information about their surroundings and other dogs.

Going back to the example of canine introductions, you may notice that one or both of the dogs start licking each other after they've approached from the side. This is to gather more information about one another in a safe and mutually beneficial manner.

During their bouts of licking, dogs also experience a wave of positive emotions. This is why many people think that licking is the canine form of kissing. Licking releases endorphins, which help to reduce stress and make the process enjoyable.

For this reason, dogs who want to submit to a stronger canine will often lick their face to show that they mean no harm.

Now, let's go back to the original question at hand. Do dogs know what your kisses mean? I hate to burst your bubble, but dogs do not have any intrinsic understanding of what those loving kisses on the head mean. It's just not in their DNA.

The act of kissing is something that's completely foreign to them, even with hundreds of years of domestication. While canines do enjoy to lick each other, having another human come up to their face is an entirely different situation.

In fact, some dogs don't like kisses at all and only learn to tolerate it for their owner's sake. Of course, dogs are just as complex as humans. All dogs think differently, so your furry friend may react differently to your kisses than another dog would to their owner's. 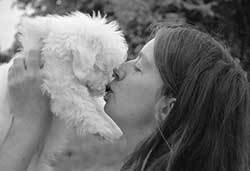 If you've spent your pup's entire life showering them with kisses every single day, they probably return the favor with a few licks.

This isn't them showing affection. Instead, your pup has learned that those licks make you happy through your reaction.

One way to look at kissing and licks is to view it as a trick. It's a trick that you never even realized that you taught them.

Dogs are very adept at learning your body language and voice. It's one of the things that make dogs great companions. They can understand when you're upset, when you like something, and when you hate something.

They use this cognitive ability to gauge your reaction and learn from it. All dogs ever want to do is spend time with their owners. The more opportunities they have to do that, the better.

When you first started kissing your dog's head, they were probably confused. However, those kisses were probably accompanied by happy praise. Then, when they first licked you back, you likely reacted positively. This effectively trained your pup to show you "affection" back.

Is Kissing Your Dog Safe?

Whether or not it's safe to kiss your dog depends entirely on your relationship with them and their overall body language. If you have already been kissing them for years, there's a pretty good chance that they don't mind.

However, you need to watch their reactions and make that decision accordingly. Even if your dog allows your kisses, it doesn't mean that they'll accept any from someone else.

Many children get bitten by family dogs because of unwanted hugs and kisses. This is because of how the act of kissing occurs in the first place.

To kiss your dog, you have to get directly in their face. As mentioned earlier, dogs approach each other from the side to avoid coming off as aggressive. When small children or other adults do this to a dog that they barely know, it's a huge red flag.

The dog will think that the child is acting aggressively, despite their kisses. The moment they put their arm around the dog's shoulder, the child effectively acted on the aggression, causing the dog to react with a bite.

You should always keep an eye on your dog when small children are around. Your dog is not going to treat other people the same way they treat you. If you want to determine how your dog feels about kisses, pay close attention to their body language when you get close.

Do they start growling or baring their teeth? Do they turn their head and back away from you? If they do any of these things, you need to back off and respect their space. It's not that they don't adore you, it's just something that's foreign and uncomfortable to them.

While you can certainly check to see how your dog reacts to you, it's best to avoid letting kids and strangers kiss your dog altogether. Many dogs learn to avoid showing signs of aggression. This is often a result of their house training as a puppy.

They were taught that aggressive behavior is bad, so they do their best not to show it. Unfortunately, this calm demeanor can also give you a false sense of security.

Your dog might skip the signs of aggression altogether and go straight to a bite when a stranger tries to get close to their face.

Other Ways That Dogs Show Affection

Just because dogs don't really have a strong understanding of the importance of kissing doesn't mean that they don't love you. Dogs show other signs of affection to those that they have a bond with.

They're simple gestures that you may not immediately recognize. Called "affiliate behaviors," these small actions are used to show affection across species when they can't communicate with by normal means.

Some of these gestures include grooming, playing games, and just being close. When it comes to grooming, dogs will often lick the hand of their owners or the body of another dog to show that they care.

Being close refers to how comfortable your dog is in your presence. If they don't mind curling up right next to you or feel the need to follow you around every room of your house, it means that they have a strong attachment to you.

While kisses don't mean that much to your dog, you can certainly continue to do them as long as they don't have a problem with it. Your pup will enjoy being close to you and having your attention.

If you really want to show your dog that you love them, you can provide them with a treat, take them for a walk, or have a rigorous play session outside. Either way, they'll appreciate the attention