What Temperature is Too Hot to Walk a Dog? & Tips for Walking in Hot Weather

Dog Vaccinations: Which are Absolutely Necessary, Optional or Annual?

Can Brother and Sister Dogs Have Puppies? The Risks of Inbreeding !

Compared to other animals, dogs are pretty intelligent. They can pick up commands, perform tricks, and even understand non-verbal cues. However, canines don't have the intelligence or maturity to think about the moral consequences of their actions.

They might learn to recognize that it's wrong to poop in the house, but dogs aren't smart enough to dive deeper into things like breeding and genetics.

As a result, it's not uncommon to see things that are downright unacceptable in the eyes of humans. The best example of this is inbreeding.

Inbreeding occurs when a brother and sister dog mate and have puppies.

Technically speaking, dogs can mate with any other closely related genetic family member. However, instances of sibling mating are far more common.

Believe it or not, these incestual pairings are more common than most realize. That kind of thing is wrong on all accounts in the human species, but it's pretty widespread in the animal kingdom.

Dogs in the same puppy litter breed all the time. So, what happens if a brother and sister dog mate? Can they have puppies?

The Lowdown on Canine Inbreeding

Dogs have an interesting relationship with their genetic family. Research suggests that dogs can learn to identify littermates and parents later in life.

However, their memories depend on how much time they spend with them during the formative period. Generally, puppies will remember other canines if they spend the first 16 weeks of life around them.

Even if they do recognize each other, brothers and siblings will still breed.

That's because canines don't have a concept of familial relationships in the same way humans do. Most dogs simply view other dogs as a pack, where they'll assign hierarchal roles based on strength and capability.

You might witness siblings protecting each other, playing, or even cuddling. However, it has nothing to do with the perceived relationship as we know it.

The concept of brother and sister doesn't exist in the canine kingdom. The same goes for the sexualization of mating. To dogs, mating is just a means to reproduce offspring.

Sexual behaviors are just a part of everyday play behaviors. It doesn't have the distinct connotation that most humans associate those actions with.

As a result, there's no gross-out factor involved. The idea of incestuous relationships is enough to make us humans shudder. But to dogs, those preconceived notions and connections don't exist.

That's why inbreeding occurs naturally. Zoologists found that isolated animals with no other potential mating prospects will interbreed to further the population.

Again, it's all instinctive and utterly free of emotions.

For the most part, inbreeding is legal. Some jurisdictions in the world consider it unlawful. However, it's usually not an issue as long as there's no animal cruelty involved.

Because dogs lack the motional biases and moral compass we do, it's not considered cruel to promote inbreeding through selection.

In fact, many professional dog breeders practice inbreeding. That's how many of the established breeds we have today came to be!

Creating a new breed is about homogenizing the gene pool so that every dog has similar traits. That has to start somewhere, and it's usually a product of inbreeding.

The practice has been around for thousands of years and continues to be a typical event in professional breeding circles.

Related:  Do Dogs Remember their Parents

I know what you're thinking: Why would anyone want to promote inbreeding? Well, there are some potential perks.

The biggest argument for inbreeding is the fact that you may produce pups with predictable traits. That's why it's such a common practice.

Breeders want to create dogs that are prized and highly sought-after. So, they'll choose dogs with the best genetic traits and breed them to strengthen the bloodline. Then, they'll continue to do that until they have "perfect" dogs.

In most cases, inbreeding is just a standard part of the equation.

It's an opportunity to homogenize desired traits and try to "breed out" unwanted ones.

Contrary to popular belief, it's not all about aesthetics. Inbreeding may help to eliminate genetic diseases and other common issues.

The Risks of Canine Inbreeding

As you can probably guess, the list of reasons why people argue that you shouldn't inbreed dogs is a lot longer than the one of people claiming that you should!

Humans are pretty much hard-coded to think that incestual relationships are a big no-no, even among animals that have no concept of family ties.

That said, the arguments against inbreeding are a lot deeper than cultural. There are many genuine risks involved.

Genetics can get very complicated, but there's a chance that something bad will come from strengthening dominant and recessive genes.

Here are some of the most significant issues that could arise.

In lamens terms: Negative genetic predispositions become so commonplace that resulting litters are unable to reproduce themselves.

It effectively stops the genetic line, rendering inbreeding efforts useless. There's no guarantee that offspring will be infertile. Some dogs grow up perfectly healthy.

However, the risks are far too significant for many breeders to take.

After getting impregnated by her brother, there's a high chance that female dogs will not deliver healthy babies.

They may come out without any problems, but most cases of inbreeding result in spontaneous miscarriages and uterine complications.

The hormones tend to go out of whack with incestuous pregnancies. The hormonal imbalance may result in irregular heat cycles, mummification of the developing litter, and more.

Some issues can become so bad that the dam suffers and dies.

Reduction of the Gene Pool

Another potential problem is the overall reduction of the gene pool. This is a huge problem that some of the most well-known dog breeds in the world developed.

By inbreeding to try and capitalize on desired traits, you're lowering the genetic variation for future generations. From an evolutionary standpoint, this can cause a ton of issues.

For example, dogs can eventually develop a propensity for certain diseases because there's no way to avoid inheriting them!

The gene pool becomes so tiny that every dog born of the breed becomes prone to those diseases.

It's a nightmare on genetics that leads to unavoidable health problems.

Puppies are already susceptible to a wide range of diseases. Their immune system is naturally weak after birth, which could lead to problems with bacteria and infections.

Inbred puppies have it even worse. Studies show that inbred dogs have an even weaker immune response, leading to a prevalence of autoimmune disorders.

These dogs often suffer from complications their entire life. What would be a simple cold could turn into a life-threatening problem.

Also read: Why is my Dog Dry Heaving?

When most people think of incestuous breeding, they picture genetic mutations. Those images aren't unfounded.

Many inbred dogs end up with life-altering mutations and abnormalities.

Many canines hold at least one intensely harmful mutation in their genetic code.

With regular breeding, that mutation stays under control and is unlikely to result in any physical issues. But when you inbreed, the chances go up exponentially.

Those mutations can become expressed, manifesting themselves in physical defects.

When dogs inbreed, they're not just strengthening desired genes. They're also multiplying ones that you don't want.

As we mentioned earlier, all dogs hold recessive genes. Because they're recessive, most don't rear their ugly heads at all. However, they're still passed down to offspring.

When you combine genetic material, those recessive traits can come out in full force! All of a sudden, those undesirable traits become present in the population's gene pool.

The problem can persist so much that the breed experiences a phenomenon known as "inbreeding depression."

When this happens, the breed experiences issues continuing the genetic line. That sounds extreme, but many experts believe that we're starting to see this happen with the Pug breed. 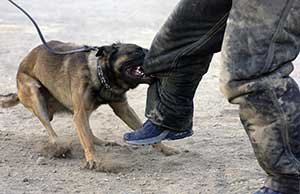 The final issue you might encounter with inbreeding is increased aggression.

The science is still unclear as you why, but inbred dogs tend to have much lower intelligence.

Some believe that the issue comes down to inbreeding depression and the persistence of genetically linked behavioral disorders.

Either way, the lower intelligence increases the dog's natural tendencies towards aggression.

Related: How to Stop Possessive Aggression in Dogs

For example, many are impulsive and can't help but chase animals or cars.

Some never learn to trust other animals or humans. In severe cases of inbreeding, dogs can't even bond with owners and resort to chronic anxiety.

It's a real problem that can have lasting effects on a dog's well-being.

While most people think of the health problems involved, behavioral troubles can be just as bad.

Many inbred pups end up being unadoptable, resulting in euthanasia.

Inbreeding might be expected in nature, but does that mean that you should encourage it through selective breeding?

We, along with most dog lovers, recommend that you don't. While some good can come with inbreeding, the risks are far too significant. There's a higher chance that inbred dogs will suffer from health complications and behavioral problems.

Despite the history of inbreeding, it's best to avoid it at all costs. If you believe that there's a risk for it in your liter, take steps to prevent it. Separate the males and females. Or, consider spaying and neutering the entire bunch.

Inbreeding is more likely to occur in close quarters where no other mates are around. So, being proactive about stopping sibling-to-sibling reproduction is a must.

Also Read: Which Vaccinations Does My Dog Really Need?

Steve has been a dog freelance writer for the last seven years.

His goal is to educate dog owners about the ins and outs of canine behavior and nutrition, as well as keeping up with the latest scientific research in the field.